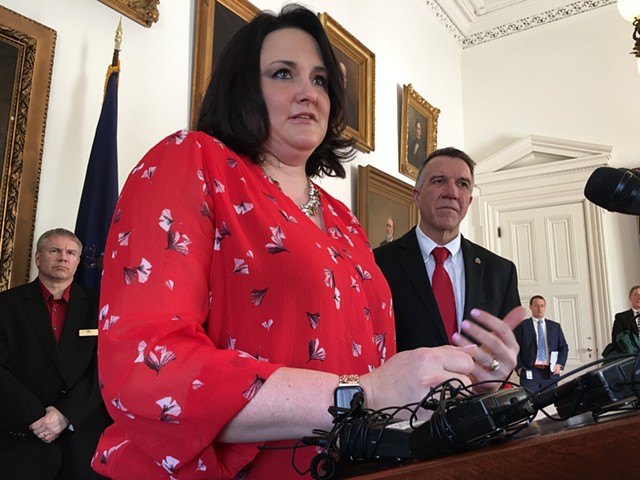 Gov. Phil Scott began his weekly press conference Thursday by recalling a tragedy and a near-tragedy that occurred the same week in February 2018. He cited the one-year anniversary of the "senseless, tragic and horrific" school shooting on February 14 in Parkland, Fla. — and the apparent plan by a Vermont teenager to commit a mass shooting at Fair Haven Union High School, which was thwarted just a day after Parkland.

The governor praised the Fair Haven community for its "courage in supporting each other."

The arrest of 18-year-old Jack Sawyer and the revelation of his detailed plans to shoot "as many as I can get" proved to be a turning point for Scott. In the aftermath, the governor reversed his longstanding opposition to gun-safety legislation. In April, he signed a package of gun bills into law.

In Range: The Week That Changed Vermont's Gun Politics
By Paul Heintz and Taylor Dobbs
Politics
Brooke Olsen-Farrell, superintendent of the Addison-Rutland Supervisory Union, spoke of the "tremendously resilient community" at the high school. "Everyone has banded together to really support one another," she added.

At the same time, the aftereffects are still present. "Initially after the event, we did have an uptick in student absences," Olsen-Farrell said. "Since that time, we have had an increase in students who have opted out on school choice or early college ... We're still working with traumatologists, and we have a therapy dog program and other pieces in place to help the students."

At the press conference, Scott and Vermont-National Education Association president Don Tinney announced a competition for middle and high school students to create a public service announcement on the subject of "See Something, Say Something." Prizes of $1,000 for first place, $500 for second and $250 for third will go to the video production programs at the winning teams' schools.

Scott expressed a determination to keep school safety in the forefront.

"My fear is that if we don't continue to talk about this, people will forget," he said. "We take things for granted over time."

He talked of last year's $5 million grant program for school security improvements; his administration has proposed another $1.5 million in the 2020 budget. "I believe this may be an ongoing need," he said.
Prev
Next