The $70 million bond to rebuild Burlington High School passed resoundingly with 73.8 percent of the vote Tuesday. After all wards were tallied, the measure passed by a count of 13,383 to 4,734.

Although the price tag seemed scary to some residents, school and city officials got behind the proposal and, ultimately, so did voters.

"I voted yes," registered nurse Hannah Warren said while at the polls Tuesday. "I think investing in education is always beneficial for our community. The high school could definitely use some love."

The megabond will pay for construction of a new, multistory building, while parts of the clunky 1960s high school complex will be demolished. The plans call for new classrooms, a bigger cafeteria and better handicap access and circulation through hallways.

Yaw Obeng, superintendent of Burlington schools, thanked voters and all the people who worked for many years on the proposal. "It's exciting. I think it will be great for the community," he said Tuesday night.

Payback on a 30-year bond for the renovations would add about $300 a year in property taxes on a house assessed at $250,000, according to school district projections.

It wasn't the only pricey item on the ballot Tuesday for Burlington residents. Voters approved a $30 million wastewater improvement bond by an even bigger margin than the school measure; 92 percent said yes. The vote was 16,756 to 1,454.

The loan will be paid back through water bills and eventually would cost the average family about $64 a year.

Burlington Mayor Miro Weinberger cheered the passage of both bonds Tuesday night. "We're making major investments in our infrastructure in a number of areas,” he said.

The high school vote was historic, added the mayor. “It's been 55 years since there was substantial investment in that building, and I think that is really going to change the trajectory of high school education in Burlington." 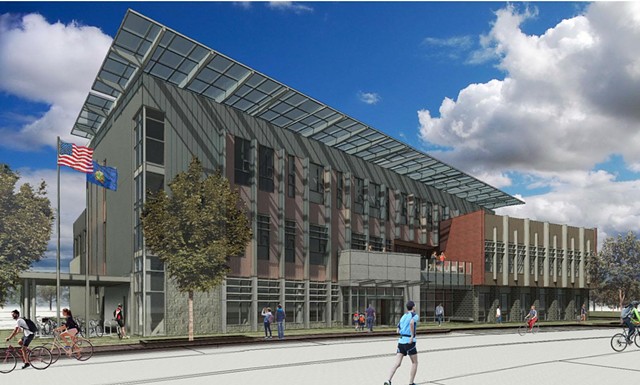 South Burlington voters were also in an affirmative mood. They said yes to four ballot items related to a $21.8 million bond for a new public building that would serve as city hall, public library and senior center.

With three out of four precincts tallied, the vote to approve the $21.8 million bond for the building was 4,547 to 1,689. The other measures also passed by wide margins.

The building will be constructed on Market Street in the City Center area where the suburb's leaders want to sprout a compact, pedestrian-oriented downtown with new housing, offices and retail.

"I think it's going to be quite a building, and it's going to fit well as an anchor to our new downtown," said Kevin Dorn, the South Burlington city manager.

The project would be paid for with tax-increment financing and with an existing property tax that funnels money into a City Center reserve fund. The timeline calls for construction to begin in summer 2019 and to be complete in 2020.

Elsewhere in the state, Montpelier residents approved by a wide margin a measure that will allow noncitizens to vote in municipal elections. It passed by a tally of 2,857 to 1,488.

And in Bennington County, State’s Attorney Erica Marthage was poised to win a third term, carrying 51 percent of the vote with 12 of 18 precincts reporting in a bitterly contested race. Her former deputy, Christina Rainville, had 22 percent, and another independent, Arnie Gottlieb, had 23 percent.

In Chittenden County-wide races, Democrat Greg Glennon ran away from Bill Norful in the probate judge race. Glennon garnered about 62 percent of the vote compared to 30 percent for Norful, who ran on the Republican line after losing the Democratic primary to Glennon in August.

The county's assistant judge race ended with wins by both Democrats, Suzanne Brown and incumbent Connie Cain Ramsey. Brown, the top vote-getter of four candidates, knocked off the other incumbent, Charles Delaney, a Progressive, by a wide margin: 30 to 12 percent.

There was a bit of a shocker in Burlington's New North End. In the two-seat state House district, incumbent Rep. Carole Ode (D-Burlington) held on, while Democratic challenger Bob Hooper knocked off Rep. Kurt Wright (R-Burlington), a longtime legislator and city council member.

Wright told the Burlington Free Press he wouldn't run again when his council seat is up in 2020. He added that Tuesday's loss was "my last race in elected politics."

Weinberger, who had defeated Wright for the Burlington mayorship in 2012, had endorsed Wright and called the results "really quite an upset."

"I did text with Kurt and, you know, Kurt has had a long career of public service for the people of Burlington and tonight wasn’t his night," Weinberger said. "But I think all the candidates in that race should be proud. They worked very hard, it was a hard fought race. So I’m going to congratulate Bob Hooper. It’s a remarkable achievement for Bob."