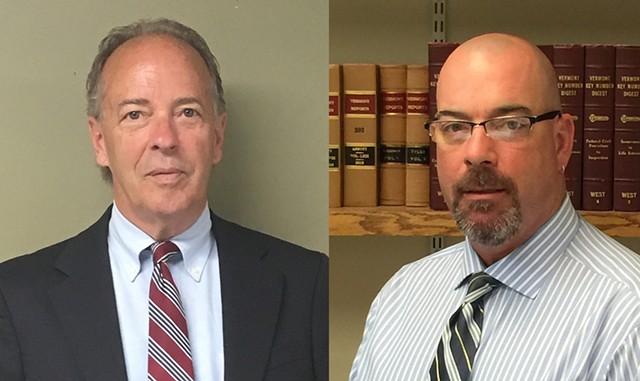 Some of Vermont's most competitive primaries Tuesday were at the county level. The campaign season was unusually intense for judgeships in Chittenden County. Elsewhere, three county prosecutors fought — one unsuccessfully — to keep their jobs.

Here is what happened in some of the races we've been following:

Lamoille County State's Attorney Paul Finnerty lost the Democratic primary to challenger Todd Shove. With all but one district reporting Tuesday night, Shove won with 50.3 percent to Finnerty's 34.2 percent. Finnerty, who is serving his first four-year term, promoted restorative justice during his time in office.

Shove, a career prosecutor who recently left his job to campaign, criticized Finnerty for taking the concept too far. He also campaigned on the promise of improving the relationship between prosecutors and law enforcement.

In Essex County, longtime state's attorney and former state senator Vincent Illuzzi eked out a 288 to 248 victory against political newcomer Amy Davis in the Republican primary. Davis, 31, handles divorce, custody and family cases as a partner at the firm Bucknam Black Davis. During the campaign, she criticized Illuzzi for not giving enough attention to his part-time job as county prosecutor, which he has held since 1998. Illuzzi also works as a lobbyist for the Vermont State Employees' Association in Montpelier. Bennington County Democrats also stuck with their prosecutor: State’s Attorney Erica Marthage beat challenger Arnie Gottlieb by just 136 votes — less than 3 percent of votes cast.

In Chittenden County, Sheriff Kevin McLaughlin held a strong lead — 54 percent to 25 percent — in the Democratic primary against his longtime deputy Michael Major. McLaughlin has been in the office since 1987, making him the longest-serving sheriff in county history.

Major, a 34-year veteran of the department, said during the campaign that he wanted to expand the department’s budget and staff by securing new contracts to provide law enforcement staffing. He expressed support for stationing an armed deputy at all of the county’s schools.

Related Chittenden Sheriff Faces Challenge From His Own Deputy

Chittenden Sheriff Faces Challenge From His Own Deputy
By Alicia Freese
Politics
There were four other primaries for sheriff positions in Vermont:

In Chittenden county, Probate Judge Gregory Glennon defeated former Winooski mayor Bill Norful, who was challenging him for the job.

Campaign Cash Issue Roils Probate Judge Race in Chittenden County
By Katie Jickling
Politics
Glennon, the brother-in-law of Vermont Attorney General T.J. Donovan, has been on the job since he was appointed by then-governor Peter Shumlin in 2016.