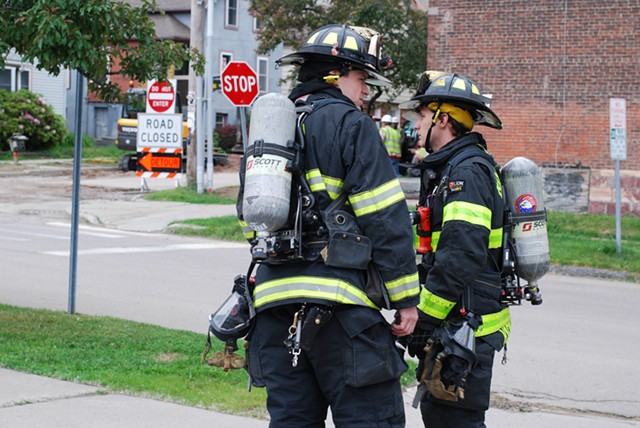 Burlington Fire Department Deputy Chief Robert Plante said a construction crew working on the street struck a natural gas main outside the apartment building, allowing pressurized gas to escape. The fire department received a call at 11:34 a.m. and quickly responded to the scene.

The smell of gas lingered over neighboring blocks.

Firefighters used hoses to dissipate the gas vapor, but the surge in water tripped the Wharf Lane apartment fire alarm and caused the sprinkler system to activate. Residents were subsequently evacuated but allowed to return around noon when firefighters declared the scene safe.

Resident Barb Morton spoke with Seven Days after alerting a firefighter to an elderly woman living on the third floor of her building. She said she heard a “kaboom” and then hissing outside her window and looked out to see the construction crew “scattering.”

Lori Francis, another resident, said she was in her apartment when the fire alarm went off. The next thing she knew, the fire department was in her building instructing her to evacuate.

By 11:55 a.m., Plante declared the area safe. The department was keeping an eye on nearby buildings as Vermont Gas evaluated the situation, he said.

It's unclear how the construction crew, which has been working on the roadway for weeks, struck the pipeline. Plante said he had only spoken with the construction company to make sure they had shut down their equipment during the investigation.
Prev
Next