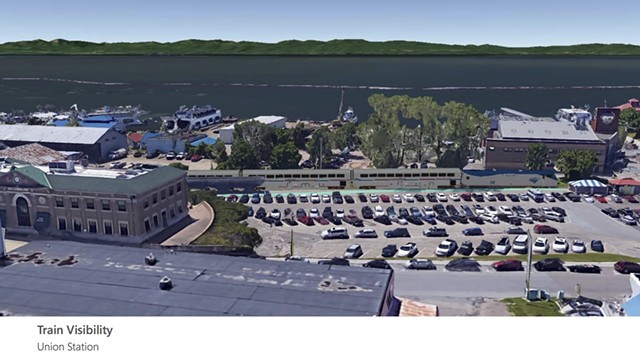 Members of the Chittenden County Regional Planning Commission drew the ire of Burlington residents Wednesday night during a presentation on potential storage locations for the Ethan Allen Express Amtrak train.

The passenger train isn't scheduled to pull into the Queen City before 2021, but
hands shot up with complaints and concerns throughout the presentation at the Department of Public Works building on Pine Street. No public comments supported the report’s suggestion that downtown Union Station, between King and College streets, is the most suitable location for overnight train storage.

Residents and business owners raised concerns about the effect the train will have on the health and sanity of those who live along the waterfront. Attendees pointed out that the committee did not take into account tourism or impacts on businesses, and seemed to lack a clear methodology for evaluating the sites.

Phelan Fretz, the executive director of the nearby ECHO, Leahy Center for Lake Champlain, expressed concern during public comment that the report was not standardized in any scientific manner despite being repeatedly labeled by committee members as an “objective evaluation.” He left the building debating the issue with Eleni Churchill, the commission's transportation program manager. “Science is under attack in this country right now. Running a science institution, I really ask that people are very careful about how they throw around numbers,” said Fretz. “Science is critical in our society and when we compromise it, we lose a great deal.”

Odele Peter, a resident of Lakeview Terrace, was one of many attendees who disagreed with the report’s assessment that Burlington's hills would block noise from the train. Peter said the hill amplifies noise and that she can hear the conversations people have on the bike path from her house above.

Staige Davis, CEO of Four Seasons Sotheby's International Realty, said the suggested location would negatively impact tourism and activity on the waterfront. Davis owns property next to Union Station, and said the proposal would make leasing and sales more difficult for condo owners.

Other possible sites include two areas in the Urban Reserve, a parkland along the bike path north of Waterfront Park; Vermont Rail System's railyard near Perkins Pier; and Flynn Avenue, adjacent to the new City Market, Onion River Co-op.

Many attendees expressed a preference for train storage at the railyard. But commission members said Vermont Rail System has insisted it does not have the capacity to store another train.

Residents were skeptical of that claim. Rick Sharp, owner of Burlington Segways, said it was inconceivable to him that the state could not find a place to store a train in a railyard.

Some attendees questioned whether storing the train in Burlington is a good idea at all. Carl Fowler, a board member of the Vermont Rail Advisory Council but who spoke as a public citizen, was met with applause when he suggested that the best storage location for a train would be in Saint Albans. Fowler also critiqued renderings the commission showed of the train in the different proposed locations. He said the train used in the images is a double-decker train, which would not make it to Vermont because of low tunnels in New York.

Despite the disagreements, many speakers affirmed their support for train transportation and expressed hope that all sides could come together. Fretz said ECHO would soon be hosting an outside display on energy that will include train history.

Churchill, who appeared tired and disappointed after the public onslaught, said her committee would regroup to see what parts of the report ought to be redone. After rerunning evaluations, the report and resident feedback will be sent to Vermont Agency of Transportation, which will ultimately decide where the train overnights.

Churchill said the train will be a great asset for the city and said she hopes to find agreement on a storage location.
Prev
Next