Rep. Diana González (P/D-Winooski) on Thursday revived the prospect of establishing a regulated marketplace for marijuana in Vermont, offering an amendment to an unrelated bill on the House floor.

González said she’s been working toward the proposal for most of the legislative session, and that recent conversations suggest there are enough votes to pass it. She said it’s got support among some Republicans who voted against January’s legalization bill because it didn’t establish a means to tax and regulate sales.

“Ultimately what we need are the votes, and in our conversations it looks like we have them,” González said.

Earlier this year, Republican Gov. Phil Scott signed a bill to legalize recreational use of marijuana. But González said that law, while a step forward, falls short. 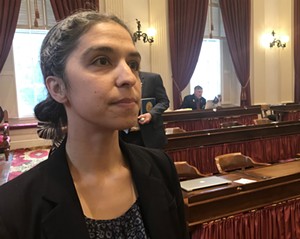 “You can’t buy or sell," she said. "That is still happening illegally, so not only is that criminalization still occurring, but any tax revenue from that transaction is being lost.”

She said that tax revenues from sales could fund programs such as needle exchanges to reduce the harm that drugs are doing in Vermont.

“[I]f we had a tax-and-regulate system for marijuana, then we could address prevention and treatment in ways that we know that we need,” she said.

González’s proposal would establish a regulated market in 2020, and would give the Department of Taxes the authority to set up a tax-collection system for pot sales.

The House is expected to debate the proposal next week.