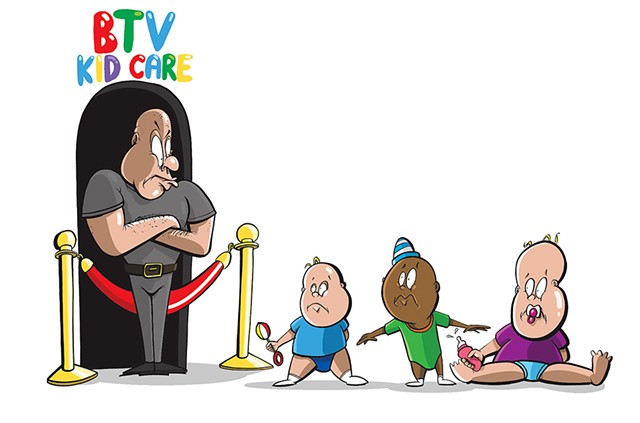 The call came after childcare providers on Thursday criticized the current grant program, which offers money for providers to create more childcare openings, during a meeting of the council's community development and neighborhood revitalization committee.

Only $14,000 of that money has gone to childcare providers so far: A grant to Ohavi Zedek Full Circle preschool, the only childcare center to submit an application.

Burlington's 5-Year-Old Early Ed Initiative Has Yet to Take First Steps
By Katie Jickling
Education
A new round of funding will go out in May, said Noelle MacKay, director of the Community and Economic Development Office. She expected more applicants this time around.

But childcare providers voiced concerns that the current funding model wasn't working. To receive grant money, daycare centers are required to add more spaces for kids, which some said was impractical. It also limits funding to $50,000 per center.
Sarah Adams-Kollitz, director of the Burlington Children’s Space, wrote in a letter to the committee that BCS, which offers care to low-income families, is struggling to retain staff and "cannot continue to cover its costs without sustained public investment."

Over the past years, Adams-Kollitz said that she has lost the optimism she once had for the city's Early Learning Initiative. “Somewhere along the way, that original vision was lost," she wrote to the committee. "Expansion was prioritized over quality services and sustainability. The needs of children and families were forgotten. The very programs doing the work of the project were ignored in favor of out-of-state consultants and a revolving set of advisors.” Charles Winkleman, a Burlington resident who teaches preschool in Winooski, compared the desire for more childcare openings to trying to build an addition on a house when the roof is on fire. “You need to put out the fire before you can consider adding to the house,” he said.

The testimony spurred the three-member committee — Brian Pine (P-Ward 3), Karen Paul (D-Ward 6) and Adam Roof (I-Ward 8) — to pass a resolution asking the mayor's administration to consider a long-term approach to providing funds to childcare providers that would allow them to use the cash for operating expenses or to cover scholarships for low-income children. Members of CEDO and the administration will report back to the committee in June.

A scholarship program would bring the Early Learning Initiative full circle: The idea was part of an earlier plan the city proposed in 2015, but it was later discarded as impractical.

Some councilors spoke forcefully in support of the proposition.

Councilor Jane Knodell (P-Central District), who attended the meeting but doesn't sit on the committee, said she wouldn’t vote for the city budget in June if it didn't include such money to help low-income kids. “These are public dollars, and we need to prioritize the needs of the population that need this the most," she said. "I will not vote for an allocation that goes to pretty well-positioned, middle-class families. I think that will be wrong."

Weinberger, in a statement Friday, argued that his administration had long planned for scholarships and took issue with Seven Days' reporting.


Meanwhile, the administration will ask the council to approve another $500,000 for the project for the next fiscal year.

Hopefully this time, Paul said, the cash would actually end up in the hands of the childcare providers. "We make the assumption that when we allocate the money, it’s actually being spent," she said.