by Taylor Dobbs and Paul Heintz 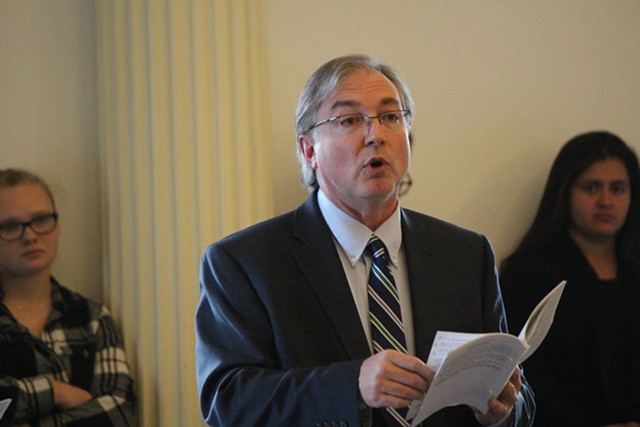 The Vermont Senate gave preliminary approval Thursday to a proposal that would mandate background checks for most gun transactions, including private sales between individuals.

The measure, authored by Sen. Phil Baruth (D/P-Chittenden), had languished for years in the Senate Judiciary Committee. On Thursday, Baruth bypassed the panel by amending another bill on the Senate floor to include the universal background check language.

Baruth’s amendment passed the Senate by a vote of 17 to 13. The underlying legislation, which addresses state storage of seized firearms, will face another vote in the chamber on Friday before it is sent to the House.

The Senate’s embrace of universal background checks came after a paradigm shift in Vermont gun politics, prompted by a school shooting two weeks ago in Parkland, Fla., and a narrowly averted incident at Fair Haven Union High School.

“Let there be no mistake about one thing,” Baruth said Thursday on the Senate floor. “Mass shootings are a viral phenomenon, and Vermont has caught that virus, like every other state in the union.”

Baruth’s amendment would require those selling, giving or otherwise transferring ownership of a gun to obtain a federal criminal background check of the recipient, performed by a licensed firearms dealer. It would not apply to members of the military, law enforcement officials or those buying guns from immediate family members.

During Thursday’s debate, some senators argued that requiring background checks for private sales would place an undue burden on law-abiding gun owners while failing to prevent dangerous people from obtaining them.

Sen. Joe Benning (R-Caledonia), who opposed the amendment, took to the Senate floor to read from a long list of mass shootings conducted by those who had undergone background checks. He said the measure would be “totally ineffective” at stopping such violence.

Baruth employed an analogy to push back on the argument. “Imagine if we said we are not going to have a speed limit because there’s no way to know whether all the cars on the road are going the speed limit,” he said.

Sen. John Rodgers (D-Essex/Orleans) said he opposed the bill because it would force those engaging in gun transactions to pay a fee to the dealer conducting the background check. He said such fees sometimes amounted to $100. Rodgers argued that those selling guns were often strapped for cash. He also called it difficult and time-consuming to find a gun dealer willing to conduct background checks.

Others, including Sen. Becca Balint (D-Windham), the Democratic majority leader, said it was long past time for the Senate to address mass shootings.

“We should take every single legal step that we can to reduce the epidemic of gun violence,” she said. “The time for hand-wringing and shoulder-shrugging on this issue is over.”

The background check proposal is one of a number of gun-related initiatives currently under consideration by the legislature. Another, which would raise the legal age to buy firearms in Vermont from 16 to 21, is expected to face a vote in the Senate on Friday. It would also be attached to the gun-storage legislation, known as S.55.

Earlier Thursday, the Senate gave final approval to S.221, which would allow authorities, after obtaining a court order, to confiscate guns from those who pose an “extreme risk” to themselves or others. That legislation faces tougher sledding in the House, which prefers yet another bill, H. 422. The latter, focused on those suspected of committing domestic violence, does not require a court order.

At a press conference Thursday afternoon, Gov. Phil Scott called on the legislature to send him one or the other before the end of the week, when lawmakers are scheduled to take a one-week recess for Town Meeting Day.

“I think Vermonters are looking for us to do something,” he said. “This sends a message that we care, we can put politics aside and do what’s right.”

Scott, who until two weeks ago opposed all forms of gun control, has said he would “probably” sign a universal background check measure into law. He also supports raising the legal age to buy firearms to 21.