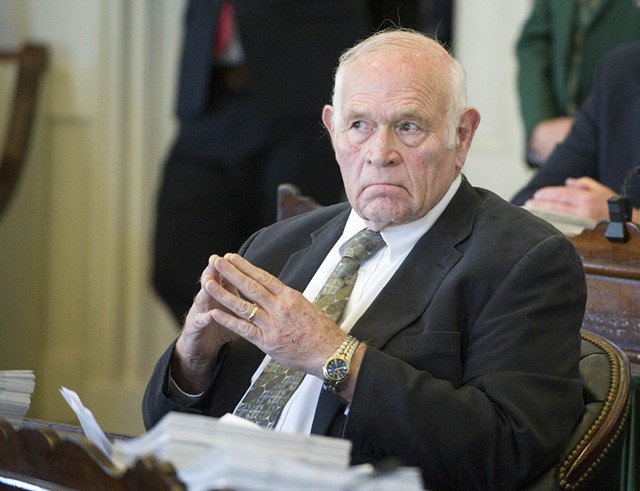 Vermont’s Senate unanimously approved a bill Wednesday that would allow police to take guns away from people deemed by a court to be an “extreme risk” to themselves or others.

Just before the vote on S.221, its sponsor, Senate Judiciary chair Dick Sears (D-Bennington) said that he hadn't initially expected the proposal to make it to the floor. A narrowly avoided school shooting in Fair Haven, he said, brought a sense of urgency to the Senate’s work.

“The one thing I’m sure of is, Vermont’s not immune [to gun violence],” Sears said. “And I think we knew that before Fair Haven, but I think Fair Haven jolted us all.”

The Senate is expected to send the bill to the House this week.

The vote is evidence of the historic shift in Vermont gun politics. After learning about the Fair Haven case, Republican Gov. Phil Scott — who campaigned on the idea that Vermont doesn’t need new gun laws — issued a five-page memo calling for gun legislation and school security measures.

In Range: The Week That Changed Vermont's Gun Politics
By Paul Heintz and Taylor Dobbs
Politics
Even the Senate’s seven Republicans voted for the bill. “This is not a gun-control law,” said Sen. Randy Brock (R-Franklin). “This is a lunatic-control law.”

Senate Majority Leader Becca Balint (D-Windham) took issue with that characterization. She noted that the bill is designed to take guns away when a person might be suicidal, not just at risk of hurting others.

“I just want to be on the record as saying I do not believe people who are suffering from depression and who are suicidal are lunatics,” Balint said.

Sen. Joe Benning (R-Caledonia) said the legislation was the first gun-related bill “to get to the mind behind the trigger. And that, to me, is how we address the problem.”

Sears, whose chairmanship has made him a gatekeeper for any gun legislation in the Senate, now faces a decision about how his committee will handle a separate domestic violence bill that the House passed last year.

That bill, H.422, sponsored by House Judiciary chair Maxine Grad (D-Moretown), would allow police to seize guns if they arrest or cite someone for domestic violence. Sears has raised concerns that would violate gun owners’ right to due process.

As an answer to Grad’s bill, Sears proposed his own “extreme risk” bill that would allow police to seize guns or explosives at the scene of any incident — but requires a court order before the weapons can be taken away.

Senate President Pro Tempore Tim Ashe (D/P-Chittenden) confirmed Wednesday that his understanding from meetings with House Speaker Mitzi Johnson (D-South Hero) was that the House will merge the two bills.

There's some support for that in the Senate, which hasn’t acted on Grad’s bill since its passage in the House last year. “Firearms and domestic violence are toxic,” Sen. Alison Clarkson (D-Windsor) said Wednesday.

Scott had demanded that both chambers quickly pass a bill and get it to his desk by Town Meeting Day on March 6. Ashe said lawmakers have given up on fully passing a bill by then.

“The governor recognized it would not be easy to pass [Sears’ bill] before Town Meeting Day, and appreciates the work the legislature is doing to try and meet that goal,” she said in an emailed statement. “While recognizing the challenges, given the sense of urgency on this issue, he’s still hopeful it can be passed before the break.”