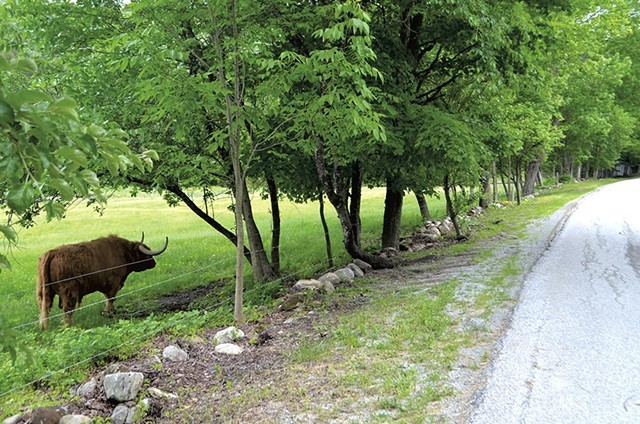 The owner of an escaped bull that caused a fatal car crash pleaded guilty Wednesday to a charge of reckless endangerment and got a suspended sentence.

Craig Mosher's 1,800-pound Scottish Highland bull was loose on Route 4 in Killington in July 2015 when it was struck by a car with two people inside.

Jon Bellis, 62, of Connecticut, was behind the wheel and died at the scene. His wife, Kathryn Bellis, was injured.

Mosher will not serve any prison time under a plea agreement finalized in Rutland Superior Court. He received a suspended sentence of six months to one year, with two years of probation.

"The state feels very strongly that [Mosher] should have a criminal conviction for his many opportunities where he knew his 1,800-pound bull got out and walked Route 4," Rutland County State's Attorney Rose Kennedy said in a prepared statement. "A guilty plea to reckless endangerment satisfies the state's needs. [Mosher], like any other animal owner, is responsible for his animals."

In prepared remarks, Kathryn Bellis said prosecutors should have been more aggressive and pursued a manslaughter charge against Mosher.

"We have been handed a life sentence of loss," Bellis wrote. "A palpable sadness consumes everyone who has lost Jon. For his children and me, this has been an obliterating loss. We have needed the continuous help of psychiatrists, hospitalizations, outpatient counseling and medications."

Kennedy's decision to pursue a criminal charge in the case was criticized by local farmers, who feared that they could face charges whenever their animals escaped, a relatively common occurrence in rural Vermont. Around 50 farmers packed the courtroom for Mosher's arraignment and clapped in support of him as he left afterward.

In her statement Wednesday, Kennedy said only one other animal owner in Rutland County had been the subject of repeated complaints about escaped animals. After learning of the Mosher case, she said, that owner took steps to better secure the animals.

"This case is not about destroying a way of life, or making a tough life harder, but it is about doing what is necessary to protect human life," Kennedy said. "If charging the defendant saves one life, it's worth it."

Mosher's lawyer, Paul Volk, could not immediately be reached for comment.