The line of the day, surprisingly, didn’t come from Sen. Bernie Sanders (I-Vt.) but from Sen. Patrick Leahy (D-Vt.).

“I am not going to vote for $25 billion for a dumb-ass wall!” he thundered, referring to President Donald Trump’s proposed barrier along the United States’ southern border. The crowd leaped to its feet and roared.

It was that kind of an afternoon in the gymnasium at Hardwick’s Hazen Union High School, an unlikely venue for a gathering of Vermont’s entire congressional delegation. After all, we’re talking about a town of 3,000 that’s, honestly, kind of hard to get to. Worth the effort, but an unlikely gathering place for top-shelf national politicos.

The Saturday event was an all-out pep rally for the progressive cause, headlined by Leahy, Sanders and Congressman Peter Welch (D-Vt.). If there were any Republicans in the audience, they kept it on the down low.

Rowdy progressives and liberals, on the other hand, showered the trio with approval and adoration. The crowd favorite was Sanders, of course; but his two colleagues more than held their own. Welch had the toughest assignment in Vermont politics: following Sanders to the lectern. He was equal to the task, delivering a fiery speech that kept the audience engaged and delighted. Spirits were high, mainly because of the august company, but also because of congressional Republicans’ epic failure to repeal the Affordable Care Act the day before. “I woke up this morning feeling pretty good” was Sanders’ opening line. The sentiment was clearly shared by everyone on hand.

Welch — a member of the House Energy and Commerce Committee, which had primary jurisdiction over the bill — recalled its curious gestation.

“The Affordable Care Act was published 30 days in advance,” he said. “We held 79 hearings. There were 14 months of debate. Remember when Republicans said ‘Read the bill’? This time, we were saying, ‘Write the bill!’”

It was a moment of well-earned schadenfreude for the delegation. Still, as Leahy noted, “These are scary times. When I talk to people, I can hear the fear and concern in their voices.”

The three laid into the Trump administration and the Republican Congress on every front — including the continuing threat to the ACA, executive actions to strip regulatory protections, and upcoming battles on the budget and tax reform. 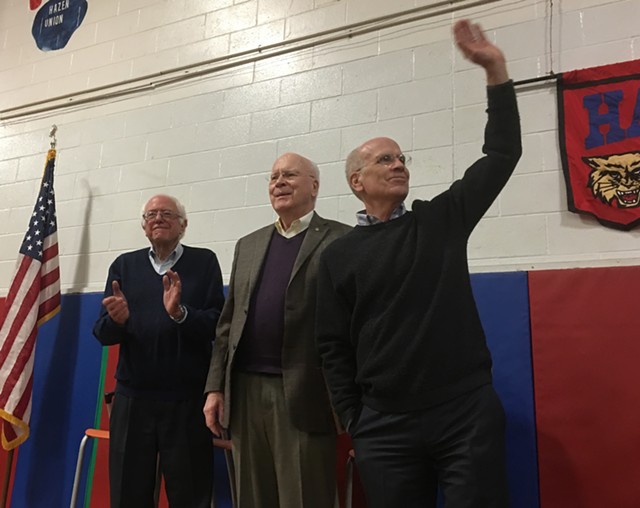 Sanders urged a continuing dedication to the cause. “Democracy is not a spectator sport!” he exclaimed. “We have got to be involved as we have never been involved before.”

“It’s not a tactic, it’s a commitment,” Welch said. “We have to be in this for the long haul, and work together.”

All three emphasized the importance of reaching across ideological lines.

“Listen to Trump voters,” said Welch. “They’re not all bad people. They’ve been sold a bill of goods by Trump.”

“Get the word out all over the country,” added Sanders. “When people in Oklahoma and Mississippi understand what Trump’s agenda means, they will oppose it.”

Listening to the three of them, one got the sense that there’s a great deal of ideological unity within the Vermont delegation. But Leahy and Welch were effusive in their praise of Sanders as a unique figure on the national stage — the person who brought “Vermont values” to the entire country. 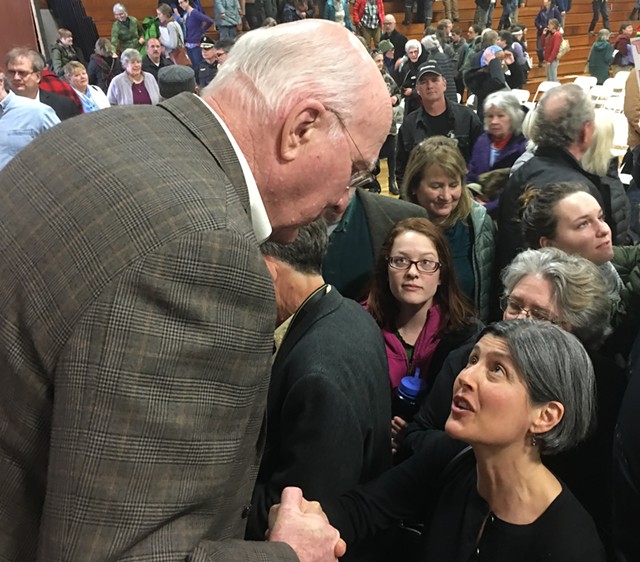 After the event, hundreds of people approached the speakers, hoping to share a word or get a picture. One woman with a hand-lettered “What Would Bernie Do?” sign got it autographed by all three.

Sanders worked the crowd for a few minutes and departed for more events in a busy schedule. Leahy and Welch lingered, greeting all who wanted a moment of their time, until the gym was practically empty.

This writer is often skeptical of the phrase “Only in Vermont.” Too often, it’s a pretext for exaggerated claims of special virtue or wisdom. But on Saturday in Hardwick … that was 100 percent pure Only In Vermont.