Approximately 60 protesters gathered Tuesday morning at a construction site in New Haven where Vermont Gas Systems is building its controversial pipeline. The work is contracted to Michels Corporation — the same Wisconsin-based company building the Dakota Access Pipeline in North Dakota, where members of the Standing Rock Sioux Tribe have in recent weeks ignited nationwide dialogue about the environmental effects of natural gas extraction.

While Rising Tide Vermont members and others have protested Vermont Gas' pipeline for years, Tuesday's action was in response to a call put out on social media by North Dakota's Sacred Stone Camp, a group started by members of the Standing Rock Sioux, for global demonstrations of solidarity.

"A lot more people [than usual] are going to be coming out today because of the Standing Rock camps," said Alex Prolman of Rising Tide. 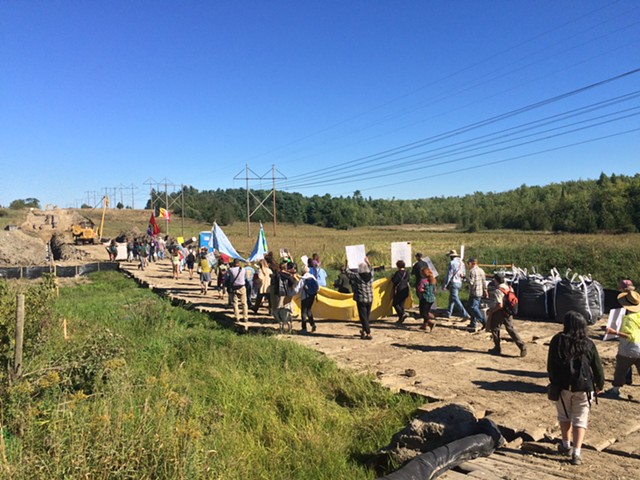 As the protesters marched from the dirt Hunt Road onto the bulldozed pathway of the site, Rising Tide's Alex Lundberg and state police Captain Michael Manley preceded them.

Two drivers walked away as protesters reached their backhoes.

The group walked up the site's gentle hills, singing songs distributed on a "song sheet." One young man played the banjo. Protesters carried handmade signs and banners reading "Stand with Standing Rock," "Water is life," "People and the planet over profit" and "Save it for our children."

Farther up, a third driver left his machine, which marked the procession's final stop. Jason Kaye, 33, of Middlebury, scrambled up an embankment and addressed the crowd: "I don't know if you were all aware, but these machines were running just a moment ago!" Yips and cheers segued into statements from local activists.

Monkton landowner Jane Palmer noted Vermont's dry summer. "I cherish our water, [and] lately our water and air and soil have been assaulted," she told the protesters. Senowa Mize-Fox, 26, of Burlington, identifies as a racial, climate and labor justice organizer. "Actions like this," she said, "[show] the interconnectedness of our struggles." Mize-Fox is an active member of the Burlington Black Lives Matter contingent, and said that while African Americans have been oppressed in this country for hundreds of years, "indigenous people have been oppressed for even longer."

Carol Irons, a septuagenarian activist with Abenaki heritage, spoke as well. "This is Abenaki country," she declared. "We are brothers and sisters with the Lakota people and the other indigenous nations. There's got to be a rising. This is the beginning of it."

Peggy Benoit, 63, of Rutland is part Mohawk and carried a pole bearing two flags. One she explained, was the purple six-nation Iroquois flag, and the other featured a Mohawk warrior and represented the unity of First Nations people. In September of 2015, Benoit was arrested while protesting at the Williston offices of Vermont Gas. When asked how long she planned to stay Tuesday, she answered "As long as I need to." 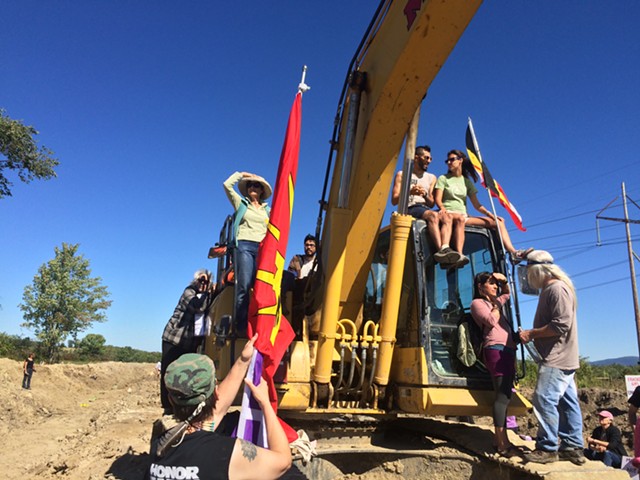 Some protesters had phone numbers written on their arms, an indicator that they were anticipating arrest. Prolman noted that "a good chunk" of protesters had filled out jail support forms, indicating their willingness to be arrested.

For others, arrest was not part of the plan. Mize-Fox stated that she avoids arrest because of "the consequences of that come with being arrested as a person of color."

By noon, at least four state police vehicles were parked near the construction site's entrance, and police were not allowing additional protesters to enter, though a handful raised their signs from the road.

According to Prolman, 11 people were arrested later in the afternoon.

"We're really pleased that today's event remained peaceful and ended safely," said Beth Parent, a spokeswoman for Vermont Gas. "We were prepared for the minor disruption and … our crews were able to move quickly to another location to continue their work."