Will Allen, an organic farmer from Thetford who was a leading force behind passage of Vermont’s 2014 genetically modified food labeling law, is being recognized as one of Politico Magazine’s 50 most influential people.

Allen, No. 36 on the list, was granted the honor “for making food transparent.” Politico concluded that Allen “has changed America’s food system.”

Ironically, Allen’s being feted for a fight he didn’t quite win. And Politico paired him with Sen. Debbie Stabenow (D-Mich.), someone he decidedly doesn’t see as an ally.

Vermont’s GMO law went into effect July 1 but was quickly preempted by federal legislation Stabenow spearheaded that will require national labeling of genetically modified foods. The federal law, however, gives agencies two years to come up with rules and allows manufacturers to label products with a smartphone-scannable QR code rather than the on-package labeling that Vermont law required.

“We are extremely dismayed by Politico’s blindsiding us in pairing me with Debbie Stabenow and concluding that we changed American agriculture,” Allen, manager of Cedar Circle Farm & Education Center in Thetford, said in a statement. “The Vermont bill certainly influenced the debate, but Stabenow’s efforts just prove the power of corporate control.” 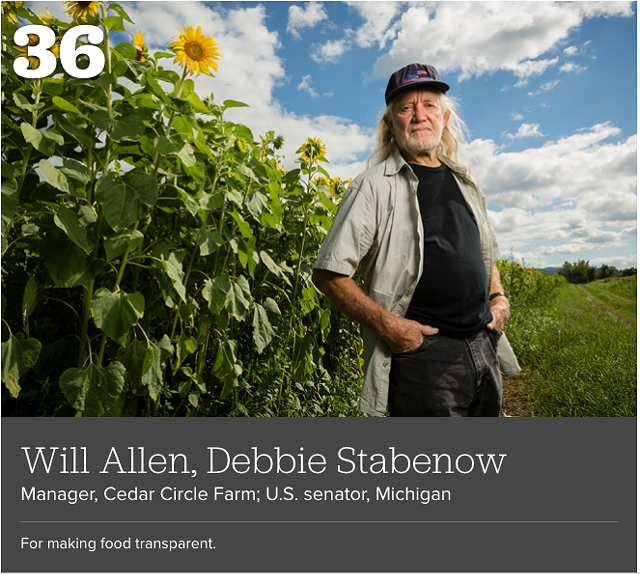 “We were fighting tooth and nail against what she was doing,” Andrea Stander, executive director of Rural Vermont, said of Stabenow.

Nonetheless, Allen plans to attend tonight’s event honoring those on the list, Stander said. “Knowing Will, he’ll kick up some fuss,” she said.

Stander said Politico called her to inquire which individual most deserved credit for passage of Vermont’s GMO law. Because Allen formed the Right to Know GMOs Coalition that advocated for the bill, he was widely considered the right choice, she said. “He did start the whole thing,” she said.

She, Allen and others involved in the debate do believe Vermont’s law brought more light to the issue of GMO ingredients.

Allen said: “This award gives us recognition for our collective effort and the opportunity to reaffirm our commitment to safe food and the public’s right to know what is in our food. And we also get to say it one more time: Stabenow betrayed us.”