Protests at Philly Convention Stir Memories of 1968 Chicago | Off Message 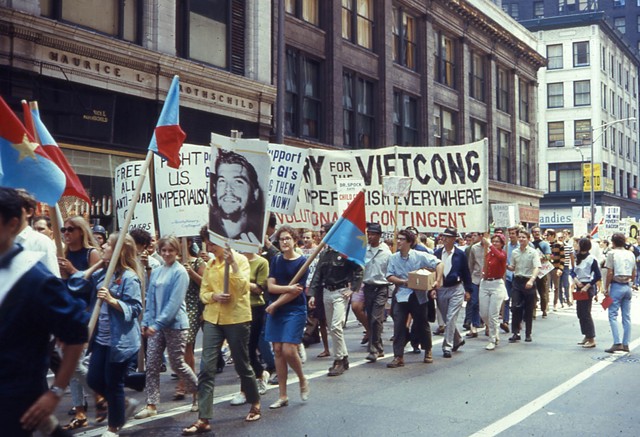 This time, I was an observer on assignment for Seven Days. Back then, I was a 19-year-old activist from Fairfield University in Connecticut taking part in demonstrations sponsored by Students for a Democratic Society.

Despite profound shifts in political circumstances over the past 48 years, some strong similarities are evident between the context and content of the events in Philadelphia and Chicago.

In both cases, Democrats were meeting to choose a candidate to succeed an incumbent Democratic president — Barack Obama now, Lyndon Johnson then. The party’s establishment was determined to nominate an experienced, moderate liberal — former senator and secretary of state Hillary Clinton now, former senator and sitting vice president Hubert Humphrey then. 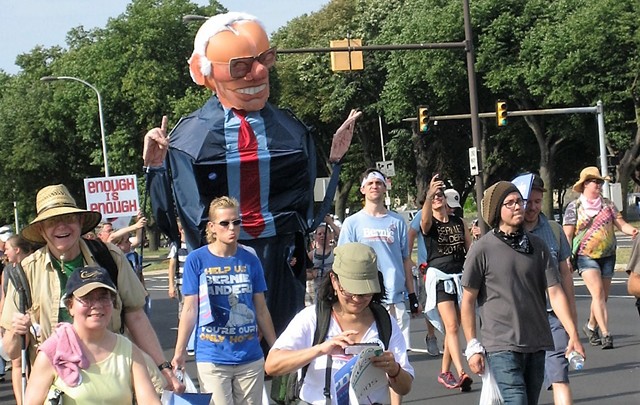 Supporters of a further-left insurgent — Sen. Bernie Sanders (I-Vt.) now, Sen. Eugene McCarthy (D-Minn.) then — complained, with justification, that the Democratic National Committee had rigged the process in favor of its chosen candidate.

In an era predating reforms that have given voters more power in picking a presidential nominee, party leaders simply ignored the results of primaries in which antiwar, anti-establishment candidates — McCarthy and Sen. Robert Kennedy (D-N.Y.) — together won more than 70 percent of votes cast. The Democrats’ overlords relied on state caucuses, which they crammed with their minions, to ensure that Humphrey would be handed a majority of delegates at the Chicago convention.

The world beyond the Windy City was convulsed in violence in 1968, just as blood is flowing in this and other nations as Democrats convene in 2016 in the City of Brotherly Love. A total of 537 U.S. soldiers — along with uncounted thousands of Vietnamese — were killed during the month the party met in Chicago. Scores of African Americans died on city streets in riots that followed the assassination of Rev. Martin Luther King Jr. in April 1968, four months prior to the Chicago convention. Signs of societal breakdown flashed urgently when Kennedy, by then the leading antiwar candidate, was shot dead in Los Angeles in June 1968.

About 10,000 protesters — roughly the same number as in Philadelphia — rallied in Chicago against racial injustice, seemingly unstoppable warfare and undemocratic conduct by the Democratic Party. Marches and gatherings in a park near the convention site were loosely organized by scruffy dissidents known then as Yippies and now as Bernie Bros. They were even more disproportionately young and white in Chicago than in Philadelphia.

“Hell no, we won’t go!” SDS demonstrators chanted in 1968 in reference to a military draft that might send them to the killing fields of Vietnam. “Hell no, DNC, we won’t vote for Hillary!” chorused Bernie or Bust militants nearly half a century later.

Differences between the two mobilizations were, however, at least as conspicuous as their parallels. 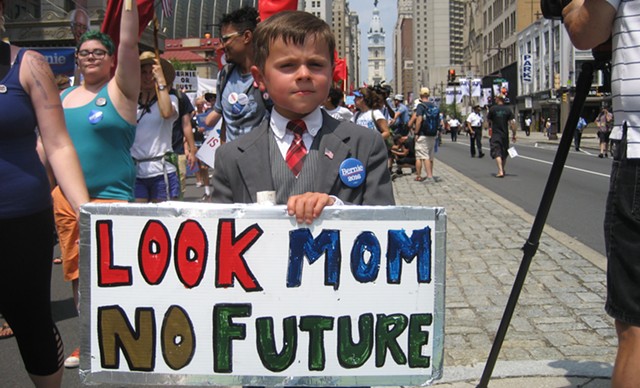 There was little levity in Philly as the Clinton refuseniks demanded victory for their hero. The Yippies, by contrast, were practitioners of an absurdist form of street theater intended to entertain as well as to enlighten. One year after performing a mass exorcism that entailed levitating the Pentagon, the Yippies staged a counter-convention in Chicago resulting in the nomination of a pig for president.

The sharpest contrast between 1968 and 2016 was the police response to the protests. Pigasus, the Yippies’ nominee, was seized in Chicago and several of his advisers were arrested. Only a few protesters — and none of their mascots — have been arrested in Philadelphia.

The Philly cops, many of whom were pedaling mountain bikes, proved calm and courteous as demonstrators stamped along Broad Street and screamed invective from a designated protest zone near the convention center.

Philadelphia Mayor Jim Kenney carried out a strategy of tolerance and even empathy — with the city agreeing, for example, to protesters’ demand that the Mississippi state flag, bearing a Confederate battle emblem, be removed from the set of state banners draped along Broad Street.

The Chicago police, under the command of old-school Democratic boss Mayor Richard J. Daley, were spoiling to crack the skulls of hippies and student radicals. Which is exactly what they did. Cops armed with clubs and firing tear gas attacked a peaceful rally near the Hilton Hotel on South Michigan Avenue. I escaped a beating that night of August 28, 1968. But running from the chaotic scene didn’t spare me from the nauseating effect of exploding gas canisters. I crumpled on a curb a couple of blocks from the Hilton, gasping and retching, as other demonstrators thrust their arms toward TV cameras and shouted in unison, “The whole world is watching!”

A subsequent report commissioned by a U.S. government panel on the causes and prevention of violence confirmed that a police riot had taken place in Chicago. It cited “unrestrained and indiscriminate police violence on many occasions ... made all the more shocking by the fact that it was often inflicted upon persons who had broken no law, disobeyed no order, made no threat.”

The aftermath of the Democratic Convention of 1968 may or may not — let’s hope not — prove a harbinger to what happens in November 2016 and beyond. The Republican candidate, Richard Nixon, narrowly defeated Humphrey all those decades ago. The Vietnam war continued to rage for another seven years. Protests seemed to have no impact on the course of the country. And that sense of impotence led a faction of SDS to form a violent sect known as the Weather Underground that carried out bombings of federal buildings — also to no avail.

Are there lessons the left should draw from what happened 48 years ago? From my senior-citizen perspective, the main takeaway is to stay true to beliefs and be aware that they might lead down a dark dead end.