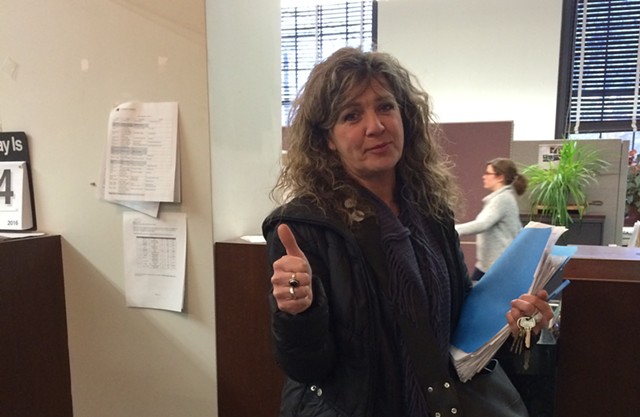 Karen Rowell walked into Burlington City Hall at 4 p.m. Thursday, carrying an overflowing blue folder. Inside, she said, were the signatures of 1,650 Burlington residents, requesting that the following question be put on the Town Meeting Day ballot: "Shall the city of Burlington keep four vehicular lanes on North Ave.?"

The residents of Burlington's New North End are embroiled in a fight over the future of North Avenue, which connects the neighborhood to downtown. For years, the city has contemplated how to improve the accident-plagued road, and in 2014, the city council approved a pilot study that would test several changes during the upcoming spring and summer months. Most contentiously, it would replace a four-lane section of North Avenue with three lanes and add bicycle paths.

Proponents of the project say it will provide useful information that could help the city make North Avenue safer for cars and cyclists alike, and city leaders have promised to ditch the new configuration if it doesn't work. The task force ushering the project onward unveiled a website this week.

Opponents, led by Rowell, argue that losing a lane will exacerbate traffic problems. Rowell said Thursday that she doubts the pilot project will be conducted objectively, and even if the majority of residents oppose the three-lane arrangement when it's concluded, she's skeptical that officials will heed their wishes.

Residents must collect signatures from 5 percent of the city's registered voters, or approximately 1,400 people, to get a question on the ballot. The ballot item is non-binding, so it wouldn't force the city's hand. But Rowell is hoping the city will reconsider doing the pilot project, if a strong majority in the New North End expresses support for the status quo on Town Meeting Day.

Thursday was the deadline for submitting an item, and the city has yet to verify the signatures Rowell collected.