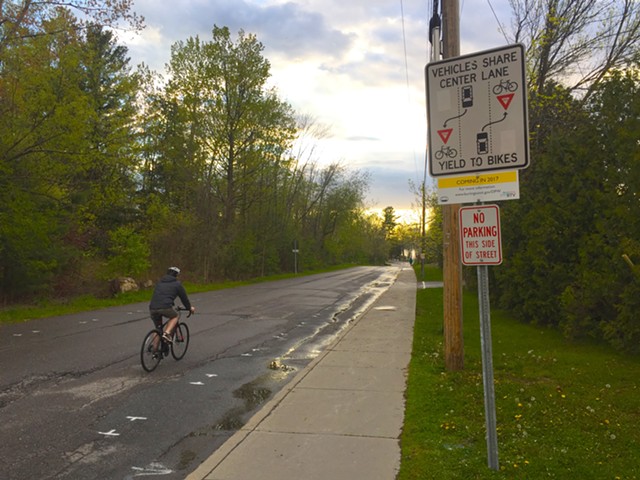 The city of Burlington is moving full speed ahead to promote bike transportation, and projects are taking shape across the city.

This week, the city will paint new advisory bike lanes near the entrance to Oakledge Park in Burlington's South End. The city also announced plans last week for a bike-share program scheduled to begin later this summer.

The projects are included in the city's bike and pedestrian master plan, which the city council adopted last month.

On Tuesday evening, the Department of Public Works and the Department of Parks, Recreation and Waterfront will paint so-called advisory bike lanes along Flynn Avenue. They'll run in both directions between the railroad tracks by Switchback Brewing and the road's terminus along Lake Champlain at Oakledge Park, said Nicole Losch, senior transportation planner at DPW.

"Advisory" lanes are marked with a dashed white line and create a "preferred" space for bicyclists, according to the city. Drivers will share a large center lane and must yield to bikes. Motorists can, when necessary, head into the bike lanes to avoid oncoming traffic.

The lanes will replace 29 free on-street parking spaces, Losch said. Last year, Losch said, DPW instituted parking kiosks in Oakledge Park to allow drivers to pay by the hour rather than a full-day rate. The kiosks were turned on Monday and charge $2 an hour.

The Flynn Avenue plan, which was approved last summer, had been years in the making, Losch said.

"For so many years, the requests from the neighborhood have been to restrict parking in some way," Losch said. She'd heard complaints of heavy use during the summer season, as families unpacked their vehicles in the midst of traffic. "Neighbors felt like this was a very unsafe situation," she said.

Burlington's first bike-share program will be piloted this summer. Losch has been working on the project, which is spearheaded by the University of Vermont, Champlain College and the Chittenden Area Transportation Management Association. The project launch includes 100 bikes scheduled to be on Queen City streets for rent by the end of the summer. Residents will be able to pay for bikes at kiosks around the city.

Once the kinks have been worked out, Losch said, the city plans to increase the number of bikes for rent and to add stations. A portion of the bicycles available will be electric-assist bikes, or e-bikes.

North of downtown, the city is seeking feedback on the North Avenue pilot bike lanes. The controversial lanes have been in place for a year, and Burlington residents have until May 29 to weigh in on the changes. The North Avenue project has also drawn criticism that the lanes clog traffic.

Castleton Polling Institute will be conducting the surveys and collecting traffic and crash data, Losch said. They'll submit a report to the city next month, paving the way for a final decision by the city council in late June.