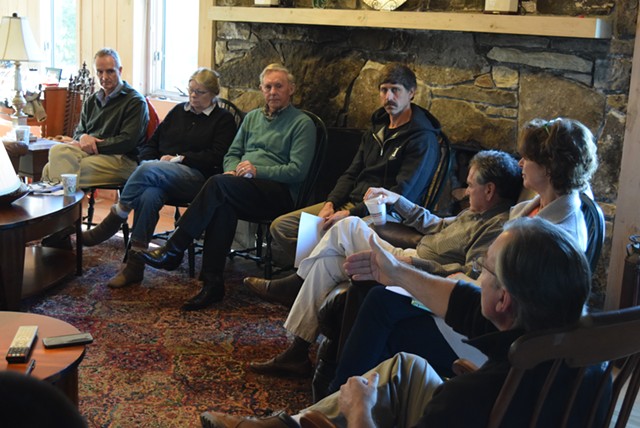 Senate Majority Leader Phil Baruth (D-Chittenden) hopes to advance a plan Wednesday to have the full Senate vote to suspend one its members who is accused of sexual assault, though many of his fellow senators remain conflicted about what to do.

At a meeting Saturday, Senate Democrats debated the issue without coming to a consensus, though it appeared Baruth’s plan might be the most likely compromise.

Baruth said he plans to ask the five-member Senate Rules Committee to send to the Senate floor on January 5 a resolution suspending Sen. Norm McAllister (R-Franklin) while criminal charges are pending against McAllister. If the committee agrees, the resolution will be the chamber’s first order of business and would require a majority vote by the Senate to pass.

“I know we’re never going to be unanimous on this,” Baruth said as he started the discussion. But Baruth said he hopes that by the first day of the 2016 legislative session in January, the Senate can come together and speak with one voice.

Fifteen of the Senate’s 23 Democrats met Saturday in the living room of Senate President Pro Tempore John Campbell’s home in Quechee, with a decorated Christmas tree beside them and views of Quechee Mountain through the back window. Sen. Ginny Lyons (D-Chittenden) joined the meeting by telephone.

McAllister, 64, of Highgate, who has served in the legislature since 2003, was arrested last May at the Statehouse as the 2015 legislative session was nearing completion. He faces six charges, including felony sexual assault, involving three women. Those charges are pending in Franklin County Superior Court. McAllister, who pleaded not guilty, has refused to resign from the Senate, despite calls to do so from many Vermont political leaders, including Democratic Gov. Peter Shumlin and Republican Lt. Gov. Phil Scott.

Saturday, Baruth didn’t ask fellow Senate Democrats to take a vote on whether to suspend McAllister, but as he pitched his plan, they clearly disagreed about what, if anything, they should do if McAllister shows up on January 5.

One of McAllister’s alleged victims worked as an unofficial assistant, or intern, to the senator. Several senators cited that as a reason the Senate should get involved.

Baruth argued that suspending McAllister until the court case is settled is “a good solution.” The situation appears to be unprecedented in the Vermont Senate. Baruth cited a case in which the California Senate voted in 2014 to suspend three members who had been charged with corruption. Vermont Senate Secretary John Bloomer said his research indicates it’s a viable legal option in Vermont.

Senate Minority Leader Joe Benning (R-Caledonia) had initiated a plan to expel McAllister, but that faltered after lawmakers learned it would require a trial-like process that would take considerable time and run the risk of interfering with the criminal case.

If McAllister is suspended, because the action wouldn’t be permanent, such a lengthy process should be unnecessary, Bloomer said. McAllister could continue to receive legislative pay but could not vote or be present on the Senate floor, Bloomer said.

Senators struggled, however, over whether it's right for them to act on the issue at all while the court case is pending. Some questioned whether they really know what McAllister did.

"We should be embarrassed about speaking on the floor about something we saw on TV or read in the newspapers," said Sen. Claire Ayer (D-Addison).

Campbell countered that he's relying not just on media reports, but on allegations spelled out in court documents.

Legislators will be receiving sexual harassment prevention training in January, Baruth said. “I don’t want Norm McAllister sitting there during that training,” he said.

That would almost create a "hostile work environment,” Campbell said.

Others argued that the McAllister issue should not be taking so much of the Senate's time.

“Why aren’t we spending our time as a caucus on serious problems that are facing all of our citizens?” Sen. Bobby Starr (D-Essex/Orleans) asked. “We’re creating this issue.”

“No, he created the issue,” responded Sen. David Zuckerman (P/D-Chittenden), referring to McAllister.

If the Rules Committee agrees to send Baruth’s plan to the Senate floor, it’s unlikely to be the only one up for debate. Sen. Peg Flory (R-Rutland) has another plan that Ayer outlined. Flory wants to create a rule that calls for a five-member Senate panel to consider action if a senator is charged with a crime, but requires that action be delayed until criminal charges are settled.

“What I don’t like about it, is it effectively takes away a power that we now have,” Baruth said.

Baruth's plan to have the Senate vote on suspending McAllister will be up to the Senate Rules Committee. Last month, that panel met to discuss McAllister’s case without alerting the public. Baruth said the committee will hold the next meeting Wednesday at the Statehouse with public warning.

What the five-member panel will do remains unclear. Baruth and Campbell, who both made it clear they support suspending McAllister, are on the committee, but they need one more vote to bring the measure to the full Senate. Also serving on the Rules Committee are Flory, Benning and Sen. Dick Mazza (D-Grand Isle). Flory told Seven Days’ Paul Heintz she opposes suspension. Benning and Mazza declined to commit, and Mazza did not attend Saturday's meeting of Senate Democrats.

McAllister did not respond Saturday to a call for comment.