T.J. Donovan Kicks Off Bid for Attorney General | Off Message 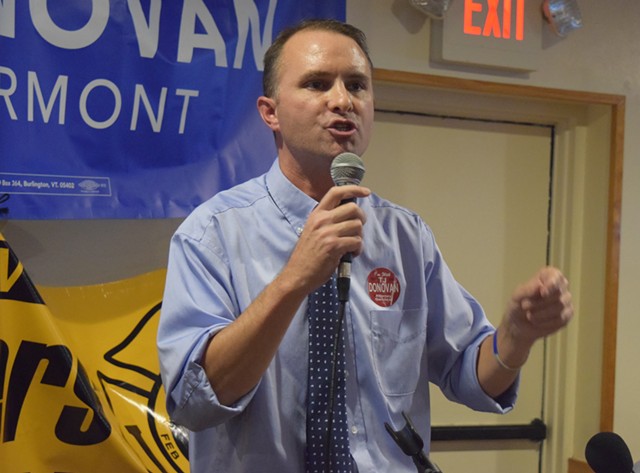 Three years ago, Democrat T.J. Donovan ran a rambunctious, upstart campaign challenging his party’s incumbent attorney general. Donovan was back Thursday night before a boisterous crowd at the St. John’s Club in Burlington, kicking off what promises to be a very different bid for attorney general.

“This campaign is really a continuation of what we started three years ago,” Donovan told the crowd. “Now let’s finish this race and let’s win this one in 2016.”

This time, Donovan has no clear opposition. Incumbent Bill Sorrell, who Donovan nearly defeated in 2012, has declared he won’t seek reelection after 19 years in office. And Donovan, who’s been Chittenden County state’s attorney for nine years, has built a broad coalition of supporters that suggests he might not face much opposition.

That was on display Thursday, as a who's who list of those active in Vermont politics — from Progressives to moderate Democrats — turned out to back the 41-year-old Donovan, who announced his plans to run in June.

No Republican candidate for attorney general has surfaced yet, despite the lure of a rare open seat. “There has been interest,” said Vermont Republican Party Chair David Sunderland, though he declined to identify possible candidates.

Shane McCormack, a Republican from Underhill who mounted a late challenge against Sorrell in 2014, said he will not run again in 2016. “There’s likely so little daylight between me and T.J. on the important, substantive issues … that I’m convinced I’m not the one to present a real alternative in this race,” McCormack said.

Donovan, in his speech Thursday night, said as attorney general he would emphasize drug treatment over incarceration, which he has done as county prosecutor. “We need to listen more, judge less,” he told the crowd.

Donovan called for ending private prison contracts, which Vermont has relied on for more than a decade, declaring the issue is the “moral test of our generation.”

He also promised to work toward a cleaner Lake Champlain through enforcement of environmental laws. “I don’t know the answer,” he said of the lake issue, but added, “There can’t be any sacred cows.”