Montpeculiar: A Punk Rock Dropout in the Speaker's Office | Off Message

Montpeculiar: A Punk Rock Dropout in the Speaker's Office When Burlington’s Rough Francis opened for proto-punk legends Death last Friday at the Flynn, founding guitarist Dylan Giambatista was not in attendance.

“I saw enough theatrics at the Statehouse this week,” he says.

Now chief of staff to House Speaker Shap Smith (D-Morristown), the 28-year-old Wallingford native has long since traded his musical aspirations for political ones.

“I want to be in a job where I’m serving the public,” he says. “I truly am bought into that.”

On the surface, Giambatista fits the mold of the up-and-coming political aide: clean-cut, polite and a touch overeager. He even bears a striking resemblance to his boss, which prompted Smith to introduce him at a Democratic caucus last December as his “doppelgänger.”

But in the Vermont Statehouse, Giambatista’s background is anything but ordinary. He dropped out of high school in 10th grade, couch-surfed for years, toured with a band he describes as “quasi-straight-edge hardcore” and has more than a few tattoos.

“I’m not a big fan of tattoos,” the speaker says. “So I really don’t want to know those kinds of things.”

From the start, Giambatista says, he was “a pretty inquisitive kid” but “didn’t learn in a traditional fashion.” After years of skipping school, he decided to call it quits in his second year at North Clarendon’s Mill River Union High School.

“It wasn’t sparking success for me,” he says. “I didn’t have a fully developed sense of what I wanted, but I knew it wasn’t that.”

As he spun his wheels, Giambatista played in a succession of bands, including the Teenage Mothers, which he describes as “an obscene, angsty, youth punk band,” and Class Clown, which achieved fleeting success when it won the VH1/School of Rock Battle of the Bands.

Giambatista says “something clicked” for him after an uncomfortable encounter in Virginia while touring with the band From the Ground Up. He decided to return to school and worked his way through community college as a manager at Leonardo’s Pizza.

In 2008, From the Ground Up bandmate Julian Hackney and his brothers, Urian and Bobby Jr., discovered Death, the long-forgotten 1970s punk band founded by their father, Bobby Sr., and uncles David and Dannis. The younger generation of Hackneys formed Rough Francis to pick up where Death left off and invited Giambatista to play guitar.

“He was a big part of the group,” Bobby Jr. says. “He has this onstage energy that’s pretty awesome. He’s just very energetic, very interactive with the crowd.”

Giambatista played with Rough Francis on and off for several years, eventually parting ways with the band to focus on school and politics. 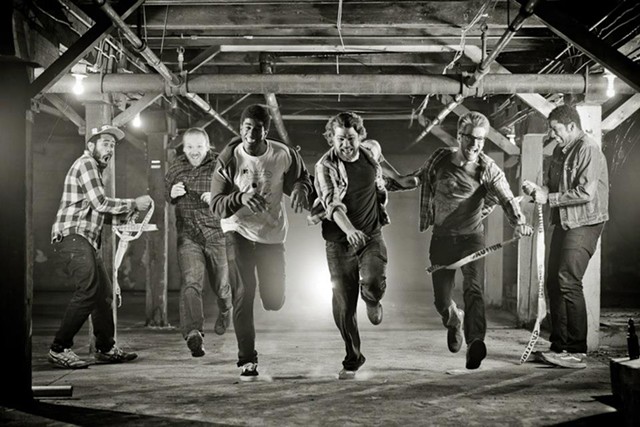 He enrolled at Johnson State College and was introduced to the Statehouse by his professor, Sen. Bill Doyle (R-Washington). An internship with the Vermont State Employees Association led to a job as Chittenden County State's Attorney T.J. Donovan's driver when he ran for attorney general in 2012. Following Donovan's loss, Giambatista worked in communications on state Treasurer Beth Pearce's campaign to retain the seat to which she had been appointed.

"Working with her, all of us were learning," he says.

After graduating from Johnson, Giambatista landed a job as Pearce’s executive assistant, which he held until moving to the speaker’s office last fall.

“I really enjoyed the work that we did together and appreciated his perceptive skills and policy development,” Pearce says. “I have not seen his punk rock. But I will tell you, he has a pretty big obsession with the eighth president of the United States.”

That’s Martin Van Buren, in case you were wondering.

While Giambatista’s title is chief of staff, that staff consists of just two interns.

“The position requires you to do everything from engaging in high-level negotiations to answering the phones,” Smith explains.

Says Giambatista, "The hardest thing I do, truly, is maintain [Smith's] schedule. That is a full-time gig."

According to the speaker, Giambatista’s unconventional life story “actually made me think more about hiring him than I might have otherwise.”

Giambatista credits it with his success.

“I am very proud of my nontraditional background,” he says. “And I’m very proud of the work I do. If I wasn’t a high school dropout, I couldn’t do it as well as I do. And if I wasn’t in a band with my friends, I would lack a lot of the skills I use on a daily basis here.”