Who's Leaving Inspirational Painted Rocks Around South Burlington and the South End? 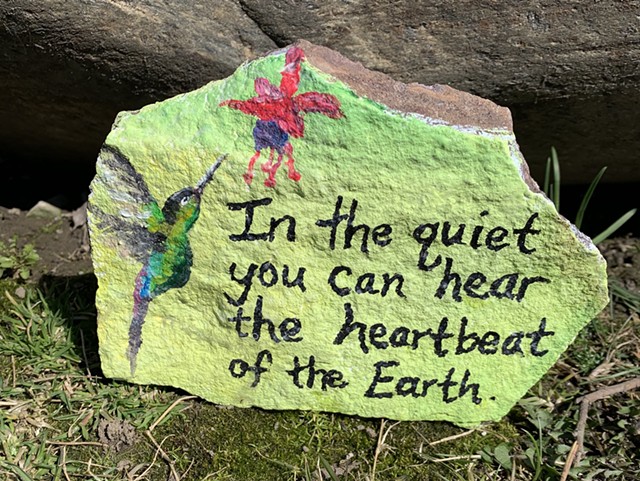 Like most Vermonters abiding by the rules of self-isolation and quarantine,  I've been talking a lot of walks. Once a day or more, my furry sidekick Mookie Petts and I venture out for a lengthy constitutional to get some air, stretch our six legs and generally do what we can to avoid losing our minds. (He's doing a better job at the last than I, most days.)

Since mid-March, our usual outdoorsy haunts have become overrun. Formerly peaceful, these excursions to places like Red Rocks Park and Mount Philo State Park have become nerve-wracking experiences — less cardio than an exercise in passing silent, fuming judgment on our peers: What does six feet look like to you, pal? You know your mask doesn't work if it's around your neck, right?  Can you get the virus from your poop bag left on the side of the trail?

So these days, we've been spending more time closer to home, jogging on a wide recreational path nearby or aimlessly wandering the quiet streets of our burbs-y neighborhood along the border of Burlington and South Burlington. It's been far more enjoyable than white-knuckle walks in the woods — and not just because it's typically less crowded.

A few weeks ago, I started noticing odd little painted rocks tucked away along the rec path. Then I started seeing them on curbs and the edges of lawns in my neighborhood. When we broadened our daily circuit, I found more in nearby hoods.

The rocks are brightly colored, often have animals or flowers painted on them, and bear a short, encouraging message of some kind. "Imagine a better world," one implored. "You are loved and seen," another assured. And this: "When you create, you create the world around you."

I admit it: That last one kinda got me.

Disclosure: Things that are overtly meant to be inspirational tend to have the opposite effect on me. I'm rarely moved by feel-good tchotchkes — unless you count the movement of my eyeballs rolling or stomach lurching. While I admire their poetry, you can keep your Mary Oliver and Rumi memes. And I don't need a tacky wall hanging to tell me my living room is "Home." (I know. I live there.)

Maybe my defenses are low after two months of fending off crippling existential dread — primarily with Zero Gravity Craft Brewery's Conehead IPA and "The Last Dance" miniseries. Maybe I'm going soft after cresting my forties — or because of all the coneheads and TV. But something about stumbling across these rocks unfailingly cracks my curmudgeonly shell and induces a smile. Finding a new one blends the wholesome thrill of an Easter egg hunt with the charming sagacity of a fortune cookie. As it turns out, that's kinda the point. 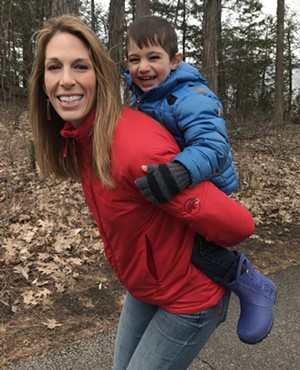 A plea for intel on social media quickly unearthed that the rocks are the handiwork of Burlington's Adrienne Coléon Gaskell and her three sons, ages 4, 6 and 8. I'm far from the only person who's taken notice of the painted stones, which Coléon Gaskell calls "Love Rocks." She's even started an Instagram feed for them.

Coléon Gaskell, who is originally from the New York City area, lives with her husband and children in the South End and runs a boutique communications agency. She typically works out of a coworking space on Pine Street but, like many around the world, is now working from home.

"One of the first things I thought when the quarantine started was that this would be a great opportunity to reconnect with my right brain and really express creatively," she explained. She added that she "had this vision of colorful rocks streaming down my street."

So shortly before Easter, Coléon Gaskell and her children began painting rocks and leaving them along their street.

"That's actually the best part," she said. "It's like a little treasure hunt."

Most of the 75 or so rocks Coléon Gaskell has painted feature birds or the sky. The quotes are hers, too, typically pulled from the ether during a run or while meditating or painting.

"It's been a long time since I've given myself space to [create]," she explained. "So the quotes are just things that naturally come to me in the moment."

Gradually, the rocks have begun to migrate beyond the family's neighborhood. They can be found as far south as the East Woods area of South Burlington and as far north as downtown Burlington. She's also taking requests for places other people would like to see the rocks.

"I keep making them, and then thinking that I want more," said Coléon Gaskell. She added that while the project initially started as something to do in the afternoons with her kids, it's since become an evening pastime for her.

"I decided that rather than vegging out on TV at night, this is my activity," she said. "It totally re-centers me and just sort of feeds my soul."

And they're pretty soothing for the rest of us, too.