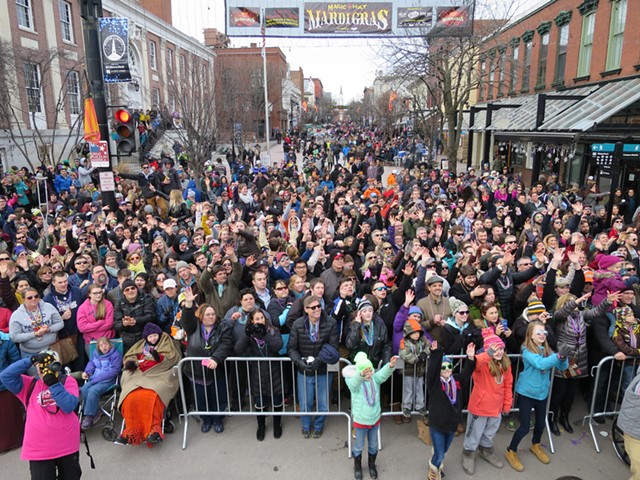 Magic Hat Brewing Company has canceled its annual Mardi Gras parade in Burlington. The local craft brewery will still throw a weekend-long Mardi Gras party this year. But for the first time in 24 years, those celebrations will not include a procession downtown. The 2019 festivities will take place from Friday, March 29, through Sunday, March 31, at Burlington's Church Street Marketplace and nearby establishments.

"We've made the decision to hold a series of different performances, events and live music acts instead of a parade," Magic Hat publicist Marilyn Tagliavia confirmed by phone. "We feel it will better serve the community."

In past years, a parade featuring floats from many prominent local businesses and organizations has been the festival's primary focus. In 2009, the whimsical procession changed location from Church Street to Main Street.

Now the festivities return to where it all started. But instead of a parade, street artists, live musicians and other entertainers will perform throughout the entire length of the Marketplace on Saturday, March 30. Small, pop-up tents and a larger, seated, 100-person carnival tent at the street's top block will house performers. All tents will be heated, and a large beer garden will accompany the top-block tent. Other related events will transpire at nearby locations from Friday through Sunday.

The official Mardi Gras holiday is always the day before Ash Wednesday, which means it can occur anytime from late February to early March. This year, Mardi Gras is March 5. Similarly, Magic Hat's Mardi Gras celebration has moved around quite a bit between late-February and early- to mid-March.

But it's never been held as late as it is this year. Scheduling it at the end of March ensures that Burlington's population of college students will not miss out because of spring break, Tagliavia said. A subsequent press release also mentioned cold temperatures as another reason to move the festival further into March.

More acts and details of the festival will be announced soon.

Correction, January 29, 2019: A previous version of this story did not distinguish between the 100-person capacity tent and the adjacent beer garden.