Only upon sitting down to write this column did I learn of the upcoming HBO series “Westworld,” a star-studded affair that’s based on Michael Crichton’s 1973 film of the same name. I’m surprised that this semi-corny, semi-obscure movie was deemed worthy of having its narrative world expanded. But it also makes a certain amount of sense.

I just watched the original film, and its story promises more than it delivers. I can see how others — like the show’s creators, Lisa Joy and Jonathan “Christopher’s brother” Nolan; and its executive producer, J.J. Abrams — would want to expand on a potentially fascinating narrative universe that never realized its original potential.

The central premise of Westworld is that, in the near future, wealthy people can pay $1,000 a day to visit one of three high-tech, ultra-detailed, historically themed amusement parks, collectively called Delos. Members of the 1 Percent can visit Medieval World, Roman World or Westworld, grown-up theme parks that accurately simulate a king’s court in 14th-century Europe, the last decadent years of the Roman Empire and a dusty American frontier town in the 1880s, respectively.

That accuracy is more like “accuracy,” though, because what the parks really recreate are the versions of these historical scenarios that have come down to us through books and movies. That tension between the real and “the real” is at the heart of Westworld, yet the film barely capitalizes on it. I can only assume that the series will delve more deeply into this plum of a theme.

Westworld: Tease
In the film, Peter (Richard Benjamin) and John (James Brolin) take a shiny silver hovercraft to visit Westworld, where they intend to live out their fantasies of the rootin’, tootin’ days of the Old West, yeee-haaa! With the exception of the guests themselves, all the “residents” of Westworld are robots. A robot sheriff stands guard over the town jail, a robot bartender serves up shots of rotgut whiskey and, yes, robot prostitutes see to the needs of randy guests who have no compunction about having sex with anthropomorphic machines. All of Westworld’s robots are lifelike in every detail, with the important exception of their hands, which have nonlifelike ridges.

The creators of these creepy theme parks have overlooked no detail, spared no precaution. Even the non-human lifeforms, like horses and rattlesnakes, are robotic, the better to ensure the safety of the guests. And the guns in Westworld fire real bullets, but they also have built-in sensors that prevent them from being fired at warm-blooded targets. 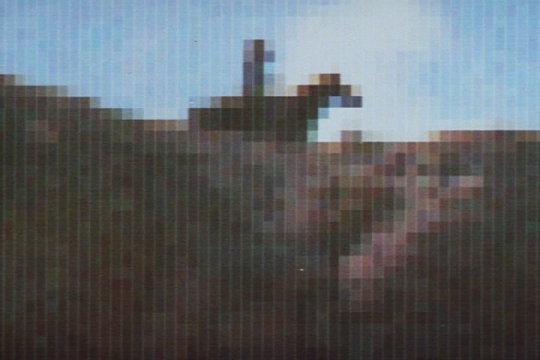 But of course something goes wrong. A “computer disease” unexpectedly starts to infect Delos’ robotic residents, causing them to behave unpredictably and sometimes dangerously. One of those robotic rattlesnakes chomps on John’s forearm, for instance; soon the disease spreads to the humanoid robots, which start injuring and even killing the guests. The parks’ operating systems get infected, too, preventing Delos technicians from addressing this increasingly dangerous problem.

The movie’s central storyline is resolved as one might expect: Peter figures out how to outsmart the gunslinger (Yul Brynner), who has been pursuing him murderously, and escapes Westworld with his life. Others are less fortunate. James is killed by the gunslinger; he hadn’t been expecting the robot to shoot live rounds. And one poor schmuck, who had been whoring it up in Medieval World, gets run through with a broadsword.

Given that the first season of the HBO series will consist of at least 10 episodes, one can only imagine its story will not resolve itself quite so readily. Then again, not every loose end in Westworld is tied up. Indeed, Peter defeats only one adversary; the electronic disease (Crichton was prescient in envisioning computer viruses) still rages through all three of Delos’ parks. The ultimate fate of the parks is left in question, though not explicitly. The film simply ends when Peter defeats the gunslinger.

The “Westworld” series  may pick up where the movie leaves off; even if it does so, it will surely also spin off into unrelated story avenues. The show’s creators had a lot to work with, as Crichton left all kinds of unanswered questions in his movie. I was surprised, in fact, by how incomplete and herky-jerky the story of Westworld is, given Crichton’s reputation for tightly plotted genre fiction. (The man also apparently liked the idea of amusement parks breaking bad: He’d revisit it in his blockbuster 1990 novel Jurassic Park.)

The story of Westworld abounds in plot holes and imperfections. For one, we don’t know the source of the computer disease. It just … is, and for no reason. Crichton doesn’t even offer a suggestion about whether the disease might have been planted by some nefarious baddie, or, more trenchantly, whether it represents the first step in the robots' acquiring sentience. These possibilities seem like no-brainers to me.

On a structural level, Crichton includes far too many scenes of technicians puzzling over malfunctioning robots. He brings us down into their subterranean computer cave at least a dozen times, but none of these scenes builds narrative knowledge or suspense. Every time we visit these technicians, they simply wonder aloud what’s going on with the robots, drawing no conclusions and suggesting no theories. Their brows just stay furrowed for more than half of the movie.

When the disease finally starts causing obvious damage, the technicians are rendered utterly helpless. The disease disables the door locks and the ventilation system, so, once they're done puzzling over things, they asphyxiate. Ah, well, they didn’t move the story along, anyway.

To me, however, the most unforgivable narrative sin that Crichton commits in Westworld is his failure to exploit the idea that the theme parks are not simulations of reality but realizations of fantasy. The film overlooks a vein of thematic gold: Westworld is predicated on fiction, not reality.

Everything in the park is effectively two degrees removed from real life: It’s not just a robotic facsimile of a bygone historical era, but a facsimile that’s rooted in fiction. The main street in Westworld doesn’t look like that of an authentic Old West town, but like that of a John Wayne film from 1953. The robots in Westworld don’t behave like real people; they behave like living embodiments of every convention and cliché in the Western genre. The madam of the bordello is a brassy dame with a heart of gold; the gunslinger is a laconic misanthrope with a (literally) steely stare; the lazy sheriff actually leans back in his chair and pulls his hat over his face, giving Peter a chance to bust out of the hoosegow.

It's incredible to me that Westworld does nothing with the notion of these multiple levels of fiction and (self-) deception. A more sensitive writer-director would have plumbed this idea to create narrative tension and ambiguity. Michael Crichton, however, was never the most subtle of writers. Westworld has a fascinating premise that is not fully realized. I’ll look forward to the series' delving into it more deeply.