What I'm Watching: The Seventh Victim 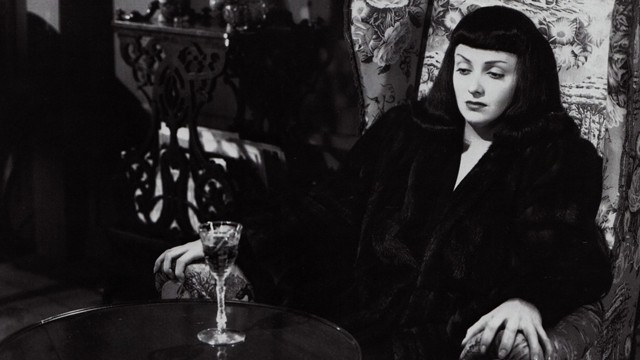 Digging into the DVD vaults the other day, I pulled out Mark Robson’s mid-budget 1943 thriller The Seventh Victim, mostly because it was one of the few films produced by Val Lewton that I had never seen. The fact that the film is more strongly identified with its producer than, as is customary, with its director, has turned out to be, for me, the most interesting thing about it.

Mark Robson’s name is not particularly well remembered these days, though he directed many films whose titles retain some degree of cultural currency: The Bridges at Toko-Ri (1954), Peyton Place (1957), The Inn of the Sixth Happiness (1958), Valley of the Dolls (1967) and even his penultimate film, the cornball, all-star disaster movie Earthquake (1974).

These are the kinds of films that, while not necessarily beloved, show up as answers to questions on “Jeopardy!” But Alex Trebek would be highly unlikely to ask contestants to name their director, because Robson’s name just isn’t well known. (It could be a good “Final Jeopardy” stumper, in fact. Alex, you can send my royalty check courtesy of Seven Days.)

In the case of The Seventh Victim, Robson’s first directorial effort, whatever style he may possess is entirely swallowed up by the “house style” that producer Lewton forged as the supervisor of the horror unit at RKO. Best known for such stylish, atmospheric 1940s horror films as Cat People, The Ghost Ship and (my favorite; I have an original lobby card from it in my home office) I Walked with a Zombie, Lewton gained renown for doing a lot with a little. None of the 14 films he produced had a particularly large budget, but all of them are suave, gorgeous little movies. Rather than throw money at eye-catching effects or monsters, Lewton emphasized the clever and eerie use of lighting and cinematography to create mood and tension. The image below, from I Walked with a Zombie, is especially illustrative of this tendency.

So strong is Lewton’s legacy that, even though I Walked with a Zombie, for instance, was directed by acknowledged master Jacques Tourneur, I would argue that it’s probably better known as a Val Lewton film. Indeed, the DVD box set from which I extracted The Seventh Victim is the nine-film “Val Lewton Horror Collection.”

The Seventh Victim is a curio of a film: a moody thriller that’s part mystery, part pre-Rosemary’s Baby investigation into New York City’s Satanic underground. At 70 minutes and without any major stars, The Seventh Victim is not quite an "A" picture and not quite a "B" picture — exactly the domain where Lewton (and his studio, RKO) operated in the early 1940s.

The film’s plot lurches awkwardly at times, and the performances of the two leading ladies, Jean Brooks and Kim Hunter, are less than dynamic. (I was most delighted to spy an uncredited Barbara Hale in a scene that takes place on the subway.) If the film is notable for anything, it’s for the stark, strange cinematography of the great Nicholas Musuraca, truly one of the greats and an artist whose work defined the semi-genre of film noir.

Inasmuch as Mark Robson’s role here was to maintain the atmosphere and “look” that Lewton had established in his three previous RKO films, he succeeded. In other words, he did a serviceable job on this film, but not an extraordinary one; one would be hard-pressed to define the director’s style or sensibility.

Even when Robson wasn’t overshadowed by a semi-legendary figure like Lewton, he never made much of a case for himself as a Major Artist. And that’s the weird — by which I mean “normal” — thing about Robson and directors like him. He had a three-and-a-half-decade career as a director in the biggest film industry in the world, and was nominated for major awards: a couple of Oscars and even Palme d’Or prizes at the Cannes Film Festival, which has always prided itself on being choosier and more artistically savvy than the Academy Awards.

Robson’s best-known films are known not for their artistic qualities, but for their embodying of a particular “moment” in American culture. Peyton Place, that notorious exposé of the seamy underbelly of 1950s suburbia, is probably the best example of this phenomenon, but even The Inn of the Sixth Happiness is better known for its (now-antiquated) take on matters cross-cultural than for its status as a work of art.

Even the Robson films that don’t “capture a moment” are better known for reasons unrelated to Robson. Von Ryan’s Express (1965) is that Frank Sinatra war film about POWs; Earthquake is one of the genre-defining disaster films; The Harder They Fall (1956) is Humphrey Bogart’s final film. Though nominally in charge of his films’ artistic vision, Robson was eternally overshadowed by his own work, for one reason or another.

In forging a Hollywood directorial career out of competence rather than artistic integrity, though, Mark Robson is anything but unusual. Especially during the years of the studio system (though the phenomenon is still common today), Hollywood’s directorial ranks fairly burst with workmanlike directors who were well regarded by their producers not for their artistic vision but for their efficiency and professionalism. To name just a few: Mitchell Leisen, Norman Z. McLeod, W.S. Van Dyke, William Beaudine, Henry Hathaway. All of these directors made some excellent films, but mostly they made normal films: the bread and butter of any and every studio, the genre films that compose the bulk of any annual slate of releases.

Does The Seventh Victim give any clue about Mark Robson’s directorial style? Yes, inasmuch as his style is competent and unexceptional, without any strong signatures of its own. The lot of the run-of-the-mill Hollywood director is a curious one. They’re at their best when they’re at their most anonymous.