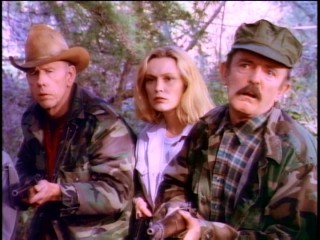 I’ve been an admirer of the films of director Joe Dante since I was a kid. His 1984 film Gremlins, which I love dearly and still watch regularly, was surely the first of his movies that I ever saw; since then, I’ve seen just about all of his other work, too — movies and TV shows alike. (I’ve even met and interviewed him a couple times. Very nice fellow.) Last evening, I finally got around to watching one of the few Dante films that I had never seen: his 1994 TV movie Runaway Daughters, which was one of the 10 films in Showtime’s “Rebel Highway” series.

Produced by second-generation exploitation film producer Lou Arkoff, this series has the stated goal of remaking a bunch of 1950s B-movies for modern audiences. They got some pretty big directors to helm these things: Robert Rodriguez, John Milius, William Friedkin.

Dante’s Runaway Daughters is a loose remake of a 1956 film of the same name that was released by Roger Corman’s American International Pictures. Dante himself, like so many important American filmmakers, got his start at AIP; that studio is slyly name-checked multiple times in the film, and the director gives Corman himself a small part in it, as the latter's acolytes often do. 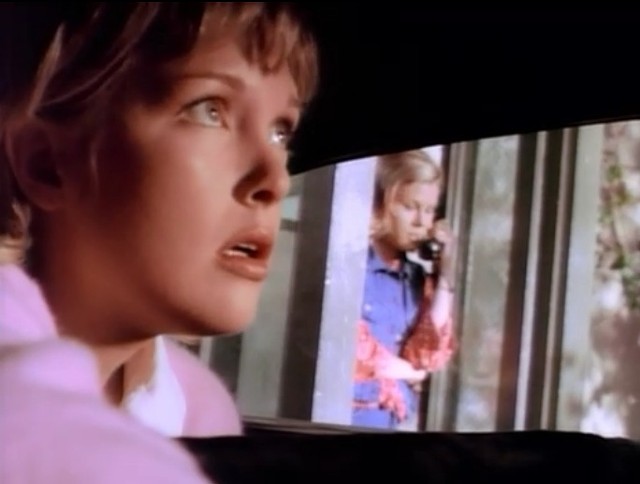 That kind of self-reflexiveness is one of the hallmarks of Dante’s style, and it’s a tactic that’s especially pronounced in the films he made from screenplays written by Charlie Haas. Their two other feature-length collaborations, Gremlins 2: The New Batch (1990; one of my favorite movies ever) and Matinee (1993), both burst with names, jokes, characters and films that refer, often in humorous ways, to other movies. For this reason (and many others), these movies are delights for the cinephile, who can enjoy them on multiple levels at once.

Runaway Daughters, too, offers up many cinematic references to the in-the-know viewer. It opens with a clip of I Was a Teenage Werewolf (which stars a young Michael Landon) and has several scenes set in a drive-in sporting posters for such movies as Naked Paradise (1957) and, of course, the original Runaway Daughters. Plenty more (and subtler) references are stuffed into the film. I encourage you to check it out to see how many you can spot — the film itself is fun, if minor.

Runaway Daughters features — it’s a stretch to say “stars” — a young Paul Rudd, which would probably be a draw for many potential viewers today. He’s funny and charming, as always. But for me, the chief pleasure of this movie was the appearance of many character actors whose faces and performances I’ve come to love over the years. 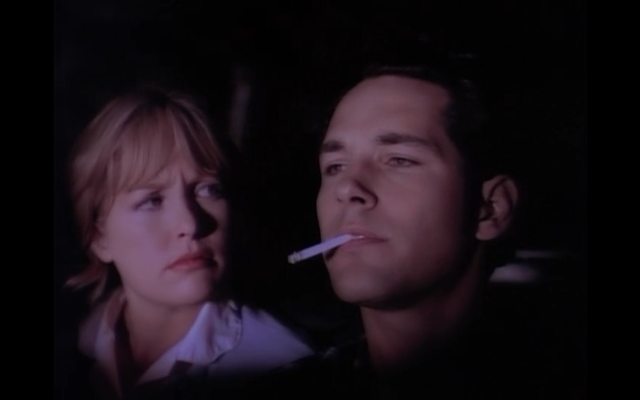 Not that my wife really cared, but I kept interrupting our viewing of Runaway Daughters with exclamations of actors’ names: “John Astin! Archie Hahn! Holy crap, Cathy Moriarty!” This happened every five minutes or even more often; the film offers a bounty for film nerds who, like me, get a kick out of the very presence of certain supporting players who can be counted on to enliven anything they’re in. Some of these actors — most prominently John Astin, who is surely on my Top 10 Actors List — are so vastly talented that it’s a shame they get only a minute or two of screen time. But I’ll savor even that minute if it’s all I’m offered.

Watching Runaway Daughters and seeing such performers as Rance Howard (Ron’s dad; Bryce’s grandpa) and Danny Breen (one of the cast members of the great 1980s HBO show “Not Necessarily the News”), I experienced a not insignificant joy. And that got me thinking about why exactly this experience was so pleasurable for me.

Part of the pleasure is surely the very act of recognition. My brain probably gave itself a little jolt of delicious dopamine every time I was able to utter the name of the semi-obscure performer on the screen. Just knowing who Belinda Balaski and Courtney Gains are is enjoyable, because it allows me to take some small satisfaction in reconfirming a small fact of which I am certain. That recognition — probably cognitively identical to that experienced by a child who identifies Santa Claus on a visit to the mall — allowed me to make further pleasurable connections. I knew that Gains played one of the Klopeks in Dante’s great film The ‘Burbs, and that Balaski played, among other roles in Dante’s oeuvre, a down-on-her-luck mother in Gremlins, a camp counselor in Piranha and several roles in Dante’s underrated TV show “Eerie, Indiana.”

Besides displaying their oft-excellent acting abilities (here, Astin, Moriarty and the always-great Joe Flaherty take top honors), these performers give me pleasure for at least one other reason. Simply by casting them, Dante suggests (or even forges) links between his film and various relevant currents of film history. Rance Howard, for instance, often shows up in the films that his son made for American International in the 1970s, as well as in many other AIP films. Runaway Daughters is explicitly about the kinds of exploitation films in which AIP specialized, and Howard’s casting further cements that connection. Another clear connection, this time to the exploitation films that are the direct source material for the films in the “Rebel Highway” series, is the casting of pretty-boy, heavy-eyebrowed 1950s pop star Fabian in the role of Rudd’s character’s father. (I’ve always kind of liked his song “Tiger,” however flimsy it may be.) And I’d be remiss if I didn’t mention the cameo by Samuel Z. Arkoff himself. The exploitation mogul, along with his trademark cigar, shows up as a convenience store owner. I patted myself on the back for recognizing him.

Other actors, though, offer connections to film genres and styles that are less directly relevant to Runaway Daughters. Joe Flaherty, for example, is probably still best known (to members of Dante’s generation as well as my own) for his work on the groundbreaking TV comedy “SCTV,” whose irreverent, intelligent comedy is similar to Dante’s own. Dabbs Greer, who has a small part in Runaway Daughters as an unscrupulous auto mechanic, appeared in hundreds of shows and movies, but is most known for his many appearances on televised westerns — exactly the kind of pulpy genre entertainment that forms the core of Dante’s aesthetic.

Dante even includes references to his own previous films, most explicitly by casting the married performers Christopher Stone and Dee Wallace Stone as the parents of one of the titular daughters; the Stones previously appeared together in Dante’s great 1981 comedy-horror film The Howling. Others in the cast — Astin, Balaski, Robert Picardo, Wendy Schaal, Archie Hahn, the wonderful and seemingly immortal Dick Miller — show up in Dante’s films so regularly that they may properly be said to compose a good portion of his “stock company.”

Inasmuch as Runaway Daughters is known today, it’s likely known for being an early (semi-)starring vehicle for Rudd, who has emerged as one of the most prominent and likable leading men of the moment. And inasmuch as people still talk about this film — which mostly they do not — they would not spend their time referring to its cast of colorful, talented, weird supporting players. But what’s really fun about the film is that its casting provides it with one of the strongest (if unintentional) links to the 1950s exploitation films that it emulates. Those ‘50s films are notable for, among other things, offering leading roles to then-unknown performers who would go on to stardom. Michael Landon, star of I Was a Teenage Werewolf, is the perfect example. In the Runaway Daughters cast, Paul Rudd, Julie Bowen and Jenny Lewis would seem to be the relevant parallel cases.

1950s exploitation films were also known for their casting of actors who had once been bigger stars, but whose careers were currently declining. In this way, this type of film filled (and fills) the same role that television did (and does) for actors’ careers: It was a good launching pad as well as a nice place to land when you came back down. Actors such as Astin, Greer, Fabian and even Moriarty “landed” in this film after careers in which their names were above the titles of various films and shows.

Dante may not have intended it and probably couldn’t have predicted it, but in casting Runaway Daughters as he did, he found a fun and historically significant way to celebrate the legacy of the genre he was evoking. That alone makes the film worth watching.