What I'm Watching: Song of the South | Live Culture

What I'm Watching: Song of the South 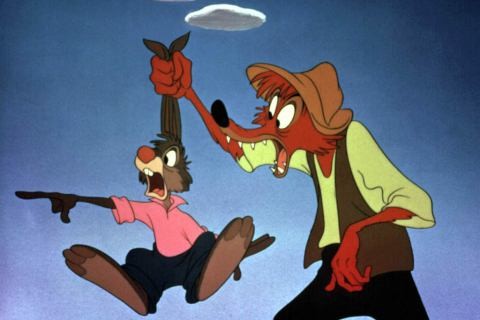 When I was a kid, the public library in my hometown would occasionally hold movie nights for its young patrons. The friendly local librarians would bust out a 16mm projector and thread up kid-friendly movies — usually feature-length cartoons, with a smattering of G-rated live-action movies. I have a fairly clear memory of having a good-natured popcorn fight with a friend during a screening of the dull-even-for-kids Condorman, a now-obscure, clumsy attempt by Disney to make a superhero movie for kids. (During the film’s original release in 1980, the Baskin-Robbins across the street from the library sold “Condorman Crunch,” quite possibly the single lamest movie tie-in product of all time.)

For whatever reason, the librarians who programmed this kiddie film series had a taste for movies that combined animation and live action. It was at the library that I developed a love for Pete’s Dragon — a remake of which, holy crap, is apparently being released next year. My first exposure to Disney’s notorious Song of the South certainly took place in that same room.

I recently watched Song of the South for the first time in a long time — possibly the first time since that library viewing circa 1979. It was a peculiar experience.

Before I discuss the film itself, it’s incumbent on me to comment on the circumstances of my seeing it. (The Walt Disney Company would probably be quite unhappy indeed to learn that I accomplished such a feat without the help of the internet, no less).

It’s a long story, but the (well-known) gist of it is that Song of the South, the 1946 animated/live-action film adapted from the stories of Joel Chandler Harris, has never been released in the United States on any form of home video. Determined in retrospect by Disney to be racially offensive, the film has been locked away in a vault for decades by the famously conservative company. One gets the sense that the High Sheriffs of Disney would prefer to obliterate from the history books everything having to do with Song of the South’s production, release and reputation. But even Disney can’t rewrite history. (Not like the company hasn’t tried.)

The film received video release in much of the world, just never in the country where it was made. (The 16mm version of Song of the South that I saw when I was 6 was likely a nontheatrical print that, by that point, could have been decades old. The history of the film's pre-video-era distribution poses interesting questions.)

Disney’s logic in releasing the film overseas but not domestically is unclear, though I imagine it had something to do with the different encoding processes used in various countries. The company might have considered it “safe” to release a PAL version of the film in, for instance, the UK (which it did in 1982) because PAL videocassettes were unplayable on NTSC-standard American VCRs. Various workarounds existed (I used to convert PAL to NTSC all the time with a commercially available $30 device), but Disney must have figured, correctly, that most people would not make the extra effort. Though I have not searched online for a full version of the film, I’m sure it’s out there and relatively easy to download or stream.

I watched the film on a DVD that was burned for me years ago by a colleague who, like me, has a scholarly interest in animation. I’m not sure where or how he got it, though obvious evidence in the film points to the 1990 Japanese video release as its initial source: namely, Japanese subtitles accompanying the film’s songs. The presence of those subtitles added another, welcome layer of surreality to my viewing of Song of the South.

And “surreal” might be the best way to describe the experience of viewing Song of the South with modern eyes, Japanese subtitles or not. This film appears to come from another planet, in which racism can be readily obliterated with a happy song. Fold those antiquated attitudes into a mix that already contains an outdated 1940s depiction of 19th-century America, and you have a bizarre stew of muddled history and a racism that’s all the more cringeworthy for being presented so “gently.” 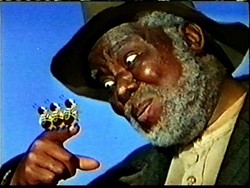 The weirdest thing about Song of the South is, in a way, the very fact of its existence. It’s not like the filmmakers or studio were ignorant of the movie’s controversial attitudes toward race; it’s not like racism didn’t exist in the 1940s. From what I know of the film’s production, Disney understood it had a potential powder keg on its hands, but decided to proceed anyway, viewing the film as a perfect opportunity for a venture the company was keen to explore: the combination of animation and live action. (Song of the South was the first feature-length Disney film with live-action sequences.) Certainly, Disney could have chosen less controversial material; the mind boggles trying to grasp the rationale behind choosing this story and depicting it this way.

Back in the late 1970s, when I saw Song of the South for the first time, it must have made a strong impression on me. When I watched it recently, I was, at times, overcome with a weird, occasionally uneasy nostalgia. I had vivid memories of the film — or rather, of parts of it.

For instance, I had absolutely zero recollection of the live-action portions of Song of the South. I remembered only the film’s animated scenes — the stories-within-the-story that involve the characters Brer Rabbit, Brer Fox and Brer Bear. That may have been because I had, as a child, a number of Song of the South tie-in products, like a picture book and, I think, the soundtrack record, both of which were adorned with illustrations of these animated characters. I don’t think I remembered that the film’s live-action “framing story,” about young Johnny’s coming of age on a Georgia plantation, even existed.

A case could be made for the animated sequences of Song of the South being pretty damn racist, as they traffic in broad-stroke stereotypes. The more racially problematic portions of the film, though, are certainly its live-action scenes, in which barely a single opportunity for racist caricature is ignored. (The film’s racism is sufficiently well documented that I need not go into it. A good online overview of this topic may be found here; those who are more curious can read Jason Sperb’s 2013 book Disney’s Most Notorious Film: Race, Convergence, and the Hidden Histories of Song of the South.)

Before anyone thanks Disney for keeping this racist treasure away from America’s Precious Children, let’s remember that the company doesn't do so out of some protectionist impulse. Disney couldn’t give a mouse fart about kids, really. The company has not given Song of the South a U.S. home-video release because, if it did, it would be in for a shitstorm of trouble with lawyers, ethicists, parents and assorted blue-noses. It's protecting only itself.

The absurdity of this whole situation is that no one can be “turned into a racist” merely by watching this (or any other) film. When I was a kid, I loved Brer Rabbit because he was clever and funny and animated in an engaging, lifelike manner — Disney’s strong suit, especially at that time. I didn’t love the character because he problematically embodied racist stereotypes of African Americans. Hell, I was too young even to understand what a stereotype was, much less understand the nature of those in Song of the South. Moreover, inasmuch as I have no recall of them, I was apparently unaffected by the film’s live-action scenes, in which its racism is much more explicit.

Song of the South is one of those films that have become so steeped in their own weird history that it’s impossible (and, arguably, inappropriate) to watch them outside that context. Don’t advertise that you’re doing so, but it’s worth going to some effort to see this film, whether for the first time or for the first time in a while. To do so can be uncomfortable and even bizarre and confounding, but the experience is nothing less than fascinating.