Movies You Missed: The One I Love | Live Culture

Movies You Missed: The One I Love 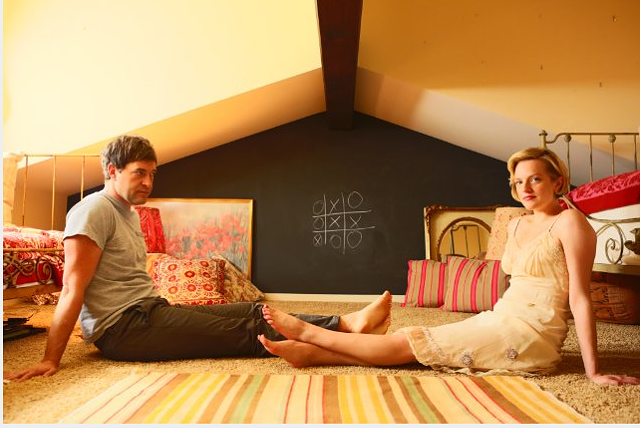 This week in movies you missed: The Lazarus Effect, currently in theaters, stars Mark Duplass as a scientist trying to resurrect the dead and his relationship with Olivia Wilde. Rick Kisonak's review suggests the film is eminently missable. So I hopped on Netflix and checked out a less predictable movie that also happens to feature Duplass grappling with love troubles.

What You Missed
Ethan (Duplass) and Sophie (Elisabeth Moss of "Mad Men") are trying to rekindle that elusive spark in their marriage. They re-create the events of the night they first met, but they just aren't feeling the thrill anymore.

Then something odd happens.

MILD SPOILERS AHEAD, COVERING NO MORE THAN THE FIRST THIRD OF THE MOVIE:

In the property's guest house (not where they're staying), Sophie discovers Ethan. He's in a great mood, and the two enjoy an evening of banter and sex. When Sophie returns to the main house, she finds a grumpy Ethan there ahead of her, claiming he's been alone this whole time.

And when Ethan explores the guest house on his own the next morning, he finds Sophie there — but it's a different Sophie. One who wears makeup, flirts and makes him bacon.

What is going on? And should the couple run for their lives from this bizarre phenomenon, or take advantage of it?

Why You Missed It
Released last August, The One I Love played in 82 U.S. theaters and is now available on Netflix and Amazon Instant. It's the first feature for director Charlie McDowell and writer Justin Lader.

Should You Keep Missing It?
My usual highly scientific 20-point scale for the evaluation of indie films:

1-4 points: Does it look pretty?
2/4. Technically, yes, because the setting is absurdly beautiful. But with its primary cast of two and single main setting, this is far from a "cinematic" film. It could have used a little Michel Gondry visual flair to go with Lader's attempt at a Charlie Kaufman-esque mind bender of a screenplay.

1-4 points: Does anything happen?
4/4. Yes, and I can't spoil it. That said, the film has a slow start. People who stream The One I Love expecting a romantic comedy (Netflix's classification for it) may turn it off before it gets interesting, because the opening feels like yet another tiresome indie drama about a young couple with relationship problems.

1-4 points: Does what happens make sense?
3/4. That depends on how you define "sense," and, again, it's hard to broach without exploring the plot in depth. For most of its runtime, The One I Love makes clear emotional sense, and that's all it needs to do. Lader's script seems to proceed from the same thesis as Eternal Sunshine of the Spotless Mind: The person we fall in love with is partly a creation of our own hopes and fantasies, and the gap between that fantasy and our real partner may become painfully evident over time.

Whether the exploration of that idea squares with later events (and partial explanations) in the film is up for debate. But it's a rich and resonant concept, all the same.

1-4 points: Do the characters seem like real people? Failing that, do they look pretty?
3/4. I wish Lader's screenplay had told us more about Ethan, Sophie and their relationship — they feel a bit sketchy and generic. (This is something Kaufman would have known how to do without overloading the film with backstory.) But the performances, Moss' in particular, fill in the gaps.

Both actors must embody two distinct incarnations of their characters, and they succeed in showing us the differences with minimal costume clues. Still, Duplass is a wet blanket in many of his scenes (Ethan isn't even excited by his discovery of the "new" Sophie), while Moss has a tense eagerness in both her "roles" that makes her interesting to watch. That bright-eyed, over-alert quality that characterizes Peggy on "Mad Men" is almost unnerving here. (If you haven't seen Moss in Jane Campion's "Top of the Lake," also on Netflix, by all means do.)

1-4 points: Does the movie give us a reason to care about anything happening on screen?
2/4. I felt the same way about The One I Love that I did about Coherence: It's a big concept executed on a tiny budget, which is intriguing to watch, but it's so busy with its twists and turns that it never quite reaches out and shakes up the audience.

What I missed most was a sense of the sinister. On paper, the plot has extremely creepy aspects, but McDowell doesn't make us feel them often enough. A full-bore horror-flick approach wouldn't have worked, just a tinge more of ominous pacing and atmosphere.

Verdict: 14/20. At one point, the characters compare their situation to "The Twilight Zone." I've been watching TTZ straight through (thanks again, Netflix!), and it's an apt parallel. If The One I Love were a "Twilight Zone" episode, it would be one of the low-key, imperfectly paced ones that time has forgotten, not a classic. But it would still be worth a watch.

This Week in Theaters
Neill Blomkamp explores a robot's humanity in Chappie. Vince Vaughn has Unfinished Business — comedy business on a Euro trip, that is. Will The Second Best Exotic Marigold Hotel be the second-best entry in the hit series?

At the Savoy, you can see Leviathan, the Oscar nominee that caused controversy with its apparent criticism of Putin's Russia.

This Week in Your Living Room
Foxcatcher, The Hunger Games: Mockingjay, Part 1.