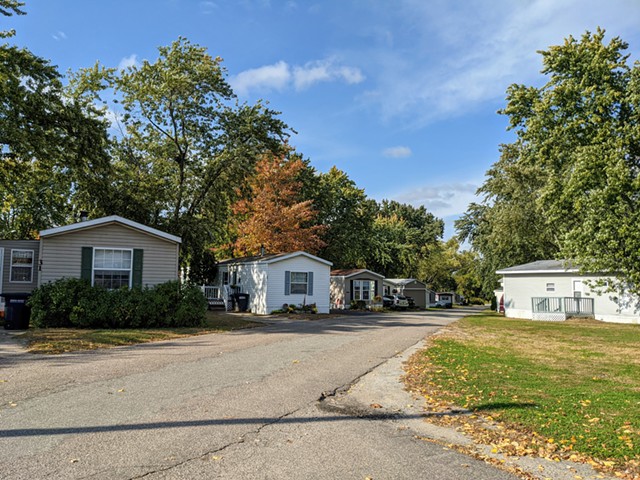 Two Colchester mobile home parks were converted to resident-owned cooperatives this month, bringing the total number of such co-ops in Vermont to 16.

The residents of the Hillcrest and Breezy Acres parks are now paying off mortgages instead of paying rent in a deal that closed February 9.

When the two parks went up for sale for $14 million in 2020, the nonprofit Cooperative Development Institute of Northampton, Mass., got in touch with residents to let them know they had the option of buying the parks, said Erikka Yandow, the secretary of the newly created Hillcrest board. The parks are next to each other and have a combined 233 homes.

Hillcrest was until recently limited to people age 55 and over, and many of its residents are retired, Yandow said. They worried a new owner would raise rents to match others in Chittenden County’s overheated rental market.

“It was really scary for a lot of people,” Yandow said.

Mobile Home Park Co-ops Thrive in Vermont
By Anne Wallace Allen
Off Message
Among other funding sources, CDI used grants from the Vermont Housing & Conservation Board and loans from the Vermont Community Loan Fund to come up with $12.3 million of the purchase price for the two parks. The monthly payments will cover their mortgages, property management, maintenance and the creation of a small emergency fund.

The nonprofit, which has helped 14 other groups of Vermont mobile home park owners create cooperatives, also provided training on how to run a co-op. CDI representatives attend all of the co-op’s meetings.

Before that training, “I had no idea how to be a board member,” said Yandow, a single parent who works for Howard Center supporting adults with intellectual disabilities. She said she learned a lot in the process. "Overall, it was a pretty good experience," she said.

Vermont has about 240 mobile home parks with about 7,000 households, according to the state Agency of Commerce and Community Development, which maintains a registry of the parks.

Most are owned privately, according to the agency, though 16 have become co-ops since 2011, including Hillcrest and Breezy Acres. Dozens of others are owned by nonprofit housing agencies. In all, Vermont has 67 mobile home parks owned by cooperatives and nonprofits, with a total of 3,440 lots. That’s 28 percent of the mobile home park lots in the state, according to the state's registry.

Mobile homes remain an affordable option as housing prices rise steeply around the state. Under Vermont law, park owners must notify residents if they plan to sell, and give them a chance to buy it themselves.

“It’s pretty reasonable, in my opinion,” Yandow said. “If it doesn’t need to be raised, we don’t raise the rent.”

Corrections, February 20, 2022: A previous version of this story misidentified the number of homes in the two parks, as well as the amount of money residents must pay off.
Prev
Next