After Complaint, Chase Bank to Remove Ad From Church Street | Off Message

After Complaint, Chase Bank to Remove Ad From Church Street

She'd noticed the window display at the former Gap store on the Church Street Marketplace earlier this winter. The large, colorful illustrations depict people riding bikes, pushing a stroller and flying a kite. But one image in particular caught Johnson’s eye.

A Black man sitting in a wheelchair is shown with his hand proffered, as if asking for change from the white man standing beside him, Johnson said. The white man has his hand on his hip and appears to be looking down at the Black man.

Johnson emailed city councilors last weekend with her concerns about the image, spurring a flurry of emails that eventually reached Chase. On Wednesday, the company apologized and said it will remove the ad, possibly as soon as Thursday.

“As soon as something comes to our attention, we address it,” said Briana Curran, Chase’s vice president of corporate communications for the Northeast. “We are working to update it.”

Curran said the bank uses several versions of the window displays at its branches around the country and is reviewing them in light of Johnson’s complaint. She was not immediately sure which ad agency designed the images.

Johnson, who works as a life coach and is a performing artist, said the imagery is discriminatory and insulting to people of color, physically disabled folks and passersby. She took a picture of the display and sent it to friends, artists and academics, all of whom agreed the ad was in poor taste. 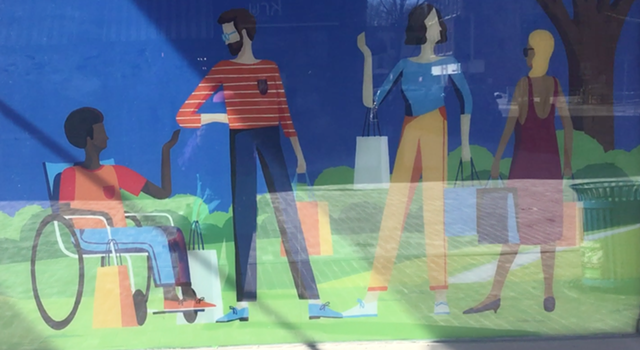 “I don’t know what the message is, but it’s the wrong message,” Johnson said. “If they want to display that, take it to an art gallery. You can do whatever you want in an art gallery. This is up on Church Street.”

City Council President Max Tracy (P-Ward 2) agreed with Johnson once he saw the image, calling it “racist and ableist.” He reached out to the property manager, Ryan Nick, who contacted a Chase representative.

“The image was never intended to be [interpreted] that way,” the staffer wrote in an email obtained by Seven Days. “We are going to fix it.”

The branch, which will be the first in Vermont, is set to open this summer. Two additional branches are planned for Williston and South Burlington, Curran said.

Johnson is pleased that Chase listened to her concerns — but she also vowed to make sure the company follows through. She said the situation showed her the value of speaking up.

“It was a courageous thing to do, but that’s who I am,” Johnson said. “You can’t keep living in the shadows and bitch about things. Just do it and whatever consequences come up, I’ll be able to handle that.”
Prev
Next