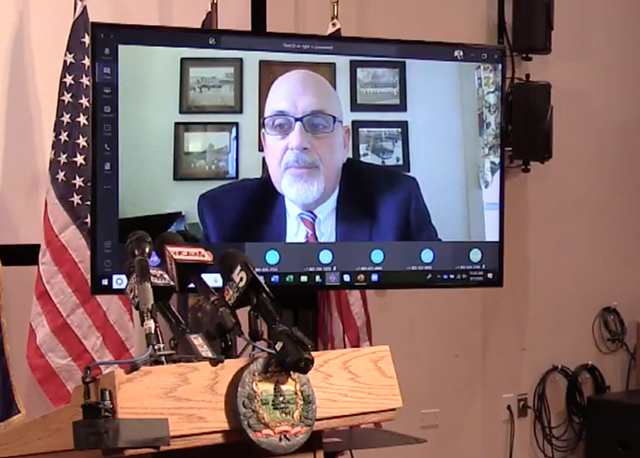 Vermont’s top Corrections official said he is “feeling better” about the coronavirus outbreak at a Mississippi prison after receiving a report from staff inspecting the conditions firsthand.

Interim Corrections Commissioner Jim Baker has previously said the outbreak had eroded his trust in CoreCivic, the private company that runs the Tallahatchie County Correctional Facility in Tutwiler, Miss., where 219 Vermont inmates are housed.

But, on Friday, Baker said he got reassuring word from two Vermont Department of Corrections officials sent to Mississippi.

“My trust level is rising,” Baker said during a press conference on Friday.

That trust was shaken over the weekend after 86 inmates tested positive for the virus. Additional results raised that number to 146.

“As the commissioner, I felt the staff at CoreCivic did not grasp the meaning of the results or have the urgency required to address the crisis,” he said.

They were tasked with assessing the medical conditions of  the inmates; the treatment they are receiving; and the sanitation, masks and other safety measures in place to curtail further spread.

The original report of 147 positive tests was revised after an audit, to 146. Sixty-five inmates tested negative. Eight inmates refused a test and are presumed to be positive.

Strenio reported back that he was so far satisfied with the medical care the inmates are receiving and the capacity to treat them at hospitals within 60 miles of Tutwiler, located in the rural northwest corner of the state. Two inmates have recently been treated at local emergency rooms for low blood-oxygen levels but have since returned to the prison.

"There are no inmates who are exhibiting symptoms that are overly concerning," Baker said.

Arnell similarly reported that proper protocols were apparently being followed, including keeping the 146 prisoners who have tested positive and the eight who refused tests isolated from the 65 who are negative.

All men are on lockdown in the facility, which has restricted their ability to go outside, congregate or contact family members, Baker said.

The Vermont DOC is trying to get information to family members about the situation in Mississippi, he said. Strenio and Arnell were due to return to Vermont on Saturday, Baker said.

Baker also said he had a “frank and honest” conversation with the company’s CEO, Damon Hininger, on Thursday night.

“I think he understands clearly where we are here in Vermont,” Baker said.