Vermont Senate Votes to Restrict Sentences of Life Without Parole 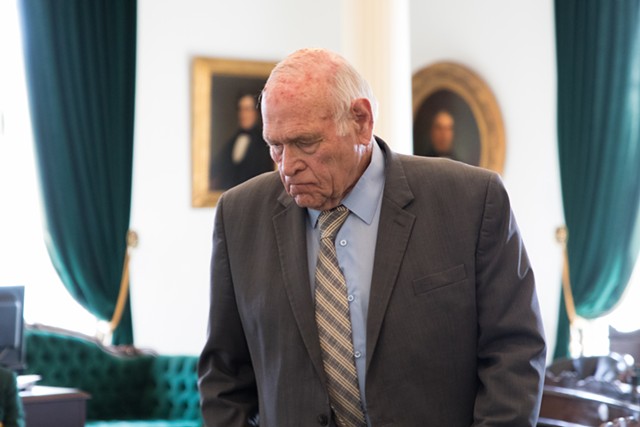 The Vermont Senate on Wednesday gave preliminary approval to a bill that would prohibit life-without-parole sentences for most murder cases. The vote was 21 to 9.

Sen. Dick Sears (D-Bennington), the bill’s sponsor, said the idea is part of a nationwide movement toward a criminal justice system that recognizes the "risk of the individual rather than the offense."

"As horrible as murder is, and certainly consequences should be severe, there are certain folks that do commit murders who may not be [as much of] a risk to reoffend as other people who commit other heinous crimes," Sears said.

DCF Shooter Jody Herring Sentenced to Life Without Parole
By Mark Davis
Off Message
Only people charged with murder can be sentenced to life without parole in Vermont. Sears' bill, S.261, would prohibit the sentence for people convicted of first- and second-degree murder. It would preserve the option for those convicted of aggravated murder, an enhanced charge that requires prosecutors to prove one of eight mitigating factors, such as an attempted sexual assault.

Sears stressed that the bill is not retroactive, meaning the 15 people in Vermont currently serving life without parole would not be impacted. Nor does it mandate anyone be freed.

Rather, it would require that prisoners be allowed to come before the parole board once they have either served their minimum sentence or have spent 35 years in prison — whichever comes first. It would then be up to the board to decide whether they should be let out, Sears said.

Final action on the bill is expected Thursday. It will then head to the House.

Criminal justice reform advocates contend that the sentences deny people a chance at redemption while worsening the problems that come with mass incarceration.

But critics of the bill say it values the lives of offenders more than it does victims. That was the message of Alex Sobel, the father of Lara Sobel, a social worker who was killed in 2015 by one of her clients, Jody Herring.

“If our society is to function, there needs to be criminal sentencing that is proportional to the crime, and acts as a requisite deterrent,” he said in a written version of his testimony.

Sobel also noted that Herring, who is serving life without parole, wasn’t charged with aggravated murder, despite killing four people.

“While it is noble, and certainly fashionable today, to pursue human rights at all levels, the rights of those convicted of murder must never supersede the rights of the victims,” he wrote.

Sen. Dick McCormack (D-Windsor), who supported the bill, acknowledged that his vote could prove "infuriating" to many of his constituents. But the question of punishing someone for a crime is not a matter of what the offender "deserves," he said.

"The question is who are we? What are we?" he said.

Along with six Republicans, three Democrats voted against the measure. They included Sen. John Rodgers (D-Essex/Orleans), who said he could not support letting "dangerous" people out of prison while the legislature is considering gun control measures, curtailing people's ability to protect themselves.

Sears, noting his committee voted it out 3-2, acknowledged his bill is  controversial. But he said he believes it's "an important step forward in criminal justice reform."