AOC and the Strokes Rally for Sanders in New Hampshire 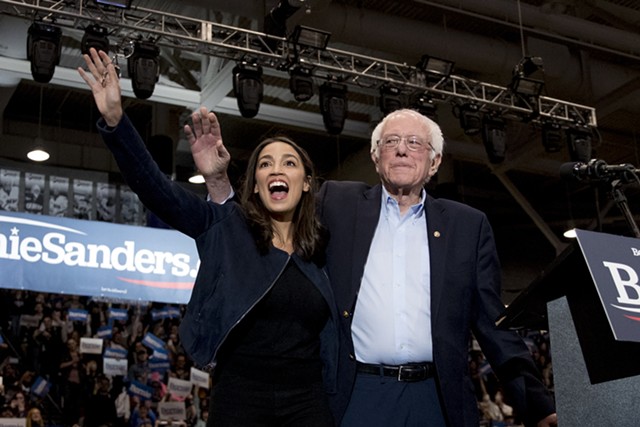 By the time the Strokes launched into “Burning Down the House” Monday night, Sen. Bernie Sanders (I-Vt.) and Rep. Alexandria Ocasio-Cortez (D-N.Y.) had already set fire to the University of New Hampshire’s Whittemore Center Arena.

The night before the first-in-the-nation presidential primary, more than 7,500 people crowded into the Durham sports complex to hear from the progressive pair and the garage rock quintet. According to Sanders, the crowd was three times the size of the next biggest Democratic rally in the state this election cycle.

Since tying Democratic rival Pete Buttigieg in the delegate count last week at the Iowa caucuses, Sanders has contrasted his fundraising practices with the former mayor’s at nearly every campaign stop. But on Monday night, as Trump held his own rally at Southern New Hampshire University in Manchester, the senator from Vermont stayed focused on the Republican incumbent, vowing to “make him a one-term president.”

Trump, Sanders said, “hopes to win reelection by dividing our people up based on the color of their skin, where they were born, their sexual orientation, their gender or their religion.”

“It won’t work because we are going to do exactly the opposite,” Sanders responded. “We’re gonna bring our people together!”

Ocasio-Cortez, whose endorsement of Sanders last October helped revive his campaign, suggested that Trump’s visit was connected to Sanders’.

“Let’s talk about November, because we know in every poll Bernie beats Trump,” she said. “Let me tell you something: Trump knows that. Why else do you think he has come here tonight? For anybody else? No, because they see you all … right here in this arena.”

The first-term member of Congress hailed Sanders for championing progressive causes long before they were in vogue. “Sen. Sanders has spent his entire life fighting for the right thing when it was unpopular,” she said. “It is hard to stand up and fight for someone you don’t know when it's not the popular thing to do, and he has done it his whole damn life.”

Ocasio-Cortez and other speakers at Monday’s rally did allude to Buttigieg and Sanders’ other well-financed rivals. “When it comes to politics, you get what you pay for,” she said. “And when you have candidates bankrolled by billionaires, who are they going to work for? Who do you think they’re gonna work for?”

Cornel West, the activist and philosopher, put it more bluntly, saying that unlike his opponents, Sanders was “not a milquetoast neoliberal.”

Cynthia Nixon, the “Sex in the City” star and 2018 New York gubernatorial candidate, told the crowd that she had decided to back Sanders after supporting former secretary of state Hillary Clinton in the 2016 Democratic presidential primary. When audience members booed at the mention of Clinton, Nixon cut them off. “Oh, no. Oh, no,” she said. "We’re not gonna do that here.”

Nixon explained that she had come around to Sanders after watching him push the Democratic discussion to the left.

“What Bernie has shown me and has shown us in the last four years is that, for too long, for as long as I can remember, we have been making do with crumbs,” she said. “And we’ve been told that the crumbs that we’re getting — unless we’re millionaires or billionaires or the heads of corporations — we’re told that those crumbs are a meal. Bernie has taught us to say, ‘I’m done with these crumbs. I want the whole pie.’”