Some Legislators' Financial Disclosures Were Late, Report Says | Off Message 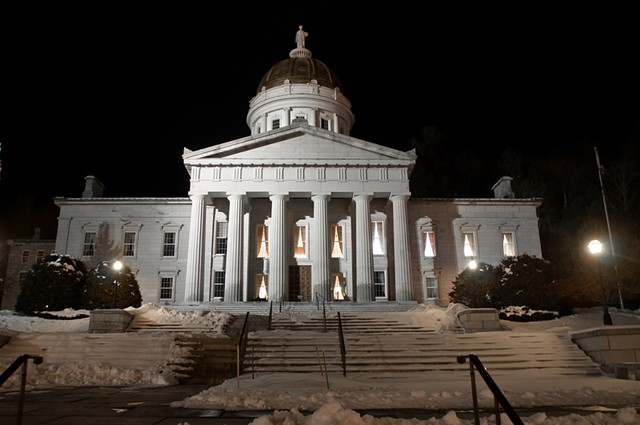 The 2018 election was the first for which Vermont state lawmakers were required to disclose their financial interests when filing to run for office, allowing voters to see potential conflicts of interest before casting their ballots.

But according to the House Ethics Panel, which released its annual report last week, disclosure forms for “multiple” legislators were not publicized by the last election. Multiple as in about 30, or a fifth of the House members, according to chair Rep. John Gannon (D-Wilmington), who called the revelation "concerning."

“When we learned of that fact, the panel decided to send a memo to those individuals and ask them to immediately take care of the problem,” Gannon said in an interview last Friday.

Related Who Does Your Legislator Work For? Check the Seven Days Disclosure Database

Who Does Your Legislator Work For? Check the Seven Days Disclosure Database
By Andrea Suozzo, Taylor Dobbs, John Walters and Paul Heintz
Off Message
State law says House candidates must file financial disclosure forms with their town clerks when submitting petitions to run for office. The documents detail sources of income for candidates and their spouses or partners greater than $5,000, including investments. They must also disclose whether they own 10 percent of any companies, and whether such companies do business with the state.

According to Gannon, some legislators claimed they had filed the disclosures in a timely manner and blamed town clerks for not sending the documents along to the Secretary of State, which posts the forms on its website.

But the panel did not fact-check these claims, instead giving its colleagues the benefit of the doubt, Gannon said. That's because, regardless of whose fault it was, what is important is that the disclosures eventually got filed, he said.

"It would have been another issue if somebody refused," he said.

House of Landlords: Property-Owning Senators Mull Tenant Protections
By Taylor Dobbs
Off Message
The Vermont Secretary of State's Office keeps the forms posted on its website until the following election cycle. The 2018 list confirms that disclosures for all elected House members are now published, and the only candidates who lack disclosures all lost their races.

Because the list is updated throughout the year, it's hard to know how many state senators did not have disclosures publicized prior to the election. Sen. Joe Benning (R-Caledonia), chair of the Senate Committee on Ethics, said the issue was not on his committee's radar last year, and he has not been notified that any senators failed to file before the 2018 election.

But the secretary of state's list shows that the disclosure of one of them — Sen. Jeanette White (D-Windham) — was still missing, more than a year later.

White said Tuesday morning that she believed she had turned in the document. “I was very big on helping to pass the [ethics] bill, so if it was part of the packet, I turned it in,” she said.

But she acknowledged that the Windham County clerk appears to have submitted the disclosure for the other senator in her district, so White wasn't sure what happened to her own. She said she could turn it in now.

"Maybe it’s in the bottom of my car somewhere,” she said with a laugh.

Gannon said that he does not plan to list the legislators contacted last session, noting that the panel only releases names when recommending that the House censure or expel someone.

In a statement sent to Seven Days, Vermont Secretary of State Jim Condos said his office does not have the resources to "audit or enforce" whether candidates turn in their disclosures.

He said he believes legislators "have an obligation" to follow the law, but noted that it imposes no penalty for those who fail to file on time. And while the secretary encouraged legislators to do so moving forward, he said that anyone who dropped the ball this time around "may have simply forgotten ... rather than making a conscious choice."

"It's important to recognize that we have a citizen Legislature, comprised of well-meaning public servants who have stepped up to serve their communities," Condos wrote.

Gannon had a similar take, calling the filing issue a “learning problem” that will improve over time. He said Vermonters are lucky that their legislators “try to do the right thing in most cases.”

“We don't have some of the serious ethical issues that we see in Congress, such as embezzlement, using campaign funds for inappropriate purposes,” Gannon said. “We just don't see those things here.”
Prev
Next