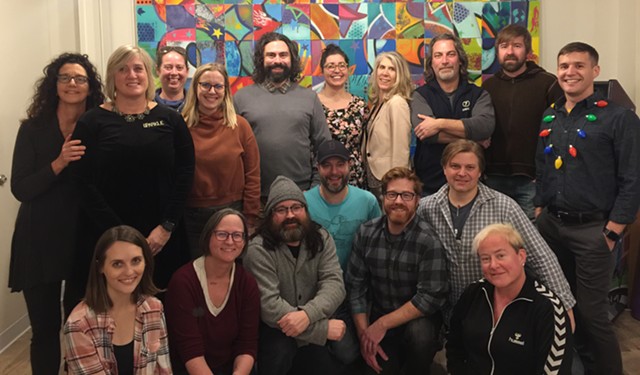 The newspaper's founders, Paula Routly and Pamela Polston, publicly announced the transition on Monday. The development is part of Seven Days' succession plan, which began in 2009 when three veteran staffers — Cathy Resmer, Don Eggert and Colby Roberts — were named junior partners. Routly and Polston founded the paper in 1995.

"We wanted to make sure the company would continue beyond us," Polston said. "We have such a great team right now."

"We want to send a message that this is a viable business, and we're here to stay," Routly added. She maintains a 51 percent stake in the company.

All of the employees, except Weiner, have worked full time at the newspaper since 2012 or earlier. Weiner became full time in 2014 but has worked for the paper since 2006, when he was hired as a part-time delivery route driver while a student at the University of Vermont.

"I feel like it’s really rare to have the kind of effort that you put in at work [be] reciprocated by your employers," Weiner said. "I felt very blessed to be in this situation."

Birgisson, who has been with the company since January 2004, said she was "blown away" by the offer and said working for Seven Days "doesn't feel like work."

"I love what I do," she said. "Back in the day, working other places, [I would] get those Sunday night blues, like, Oh God, I gotta go to work on Monday. I've never felt that way."

Sullivan started at Seven Days in 1999, just four years after the paper began publication. Sullivan said she appreciates the company giving back.

Weiner said being a part owner has instilled in him an even greater sense of responsibility to continue the company's success.

"It’s just incredible to see the impact Seven Days has on the community," he said. "That’s caused me absolutely tremendous pride to be a part of this."

Correction, January 6, 2020: A previous version of this story incorrectly reported that Weiner had graduated from UVM when he started at the paper. He was still a student at the time.
Prev
Next