Since 1989, nearly 8,000 refugees from all over the world have resettled in Vermont, arriving from Africa, Europe and Asia. Seven Days has looked at nearly three decades worth of data from the Vermont office of the U.S. Committee for Refugees and Immigrants to show what nations they came from — as well as how the influx is declining.

Not surprisingly, the number of newcomers has dropped sharply over the past two years as policy changes by the Trump administration have pushed refugee admissions to historic lows.

Each year, the president establishes a cap on the overall number of applicants the nation will admit, and lower limits on refugees from different regions of the world. 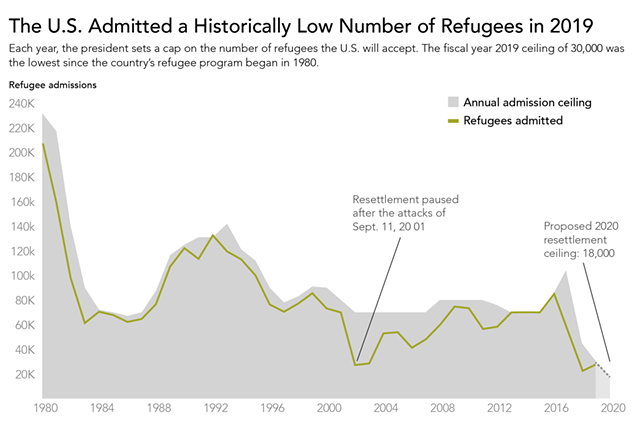 Vermont's resettlement numbers held relatively steady between 2008 and 2016. During that nine-year period, the state welcomed, on average, 336 refugees each year.

In the three years since, resettlement numbers have fallen dramatically. In 2017, Vermont resettled 236 refugees, and in 2019, just 115.

Given its relatively small population, Vermont has historically welcomed an  outsized proportion of all refugees accepted into the U.S. each year. While Vermont has about 0.2 percent of the population of the United States, the state received at least 0.6 percent of refugees resettled in 2011 and 2012. 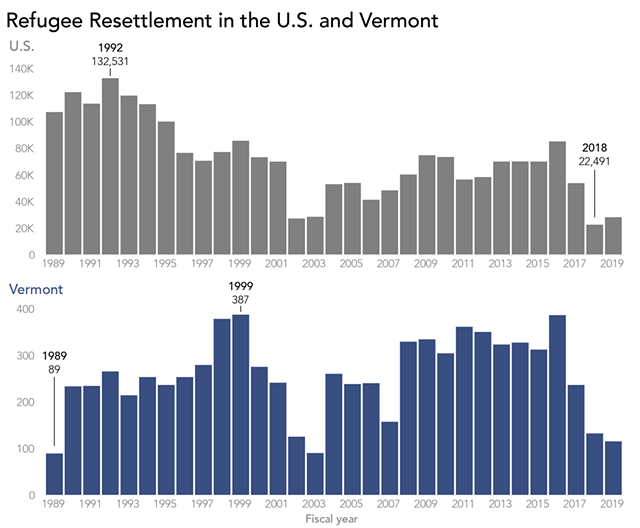 Vermont welcomed 7,956 refugees during the three decades between 1989 and 2019. Though that's a statewide total, nearly all of those people landed in Chittenden County, the majority in Burlington and Winooski.

That's not a count of the number of former refugees who currently live in the state; once resettled, people move into and out of Vermont. It also doesn't include people who immigrated via the U.S.'s asylum program.

But those numbers do provide a window into global upheaval over the past three decades. The graphic below shows that in the 1990s, the majority of refugees resettled were from Bosnia and Vietnam. The majority of arrivals in the last decade have been from Bhutan, the Democratic Republic of Congo and Somalia.

You can explore 30 years of refugee resettlement in Vermont in the chart below: