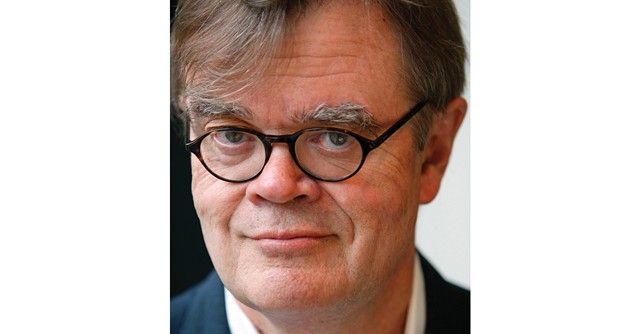 Minnesota Public Radio fired Keillor last year. A subsequent investigation by the station’s news department found multiple cases over decades in which Keillor made suggestive statements about women who worked for him and, in one case involving "dozens" of incidents, inappropriately touched a coworker.

In the statement Sunday, Kisonak had downplayed the allegations against Keillor and emphasized the planned visit was for a fundraising effort to benefit the festival.

“Garrison Keillor is not a sexual predator. We’re all people who place great importance on the value of words,” Kisonak wrote. “Can we agree that the difference between ‘predatory’ and ‘inappropriate’ is considerable and significant?”

Commenters lambasted Kisonak, calling his statement “tone deaf” and lobbying sponsors to pull their support of the festival.

Keillor was accused of being hostile and demeaning toward female colleagues by a former "A Prairie Home Companion" producer who sued Minnesota Public Radio in 1999, after she was fired from the show.

In another case, Minnesota Public Radio reported, a female employee at Keillor’s St. Paul, Minn. bookstore was the subject of a limerick Keillor wrote on a whiteboard behind the cash register. According to the report, it read:

A beauty who goes to Macalester
O, her face, her limbs, her ballast, her
Tiny blue kilt
And the way she is built
Could make a petrified phallus stir.

A spokesperson for Keillor did not respond to requests for comment Monday.

Keillor's planned appearance at the event didn't sit well with Burlington Book Festival's sponsors. The Vermont Humanities Council learned about it on September 13, according to communications director Ryan Newswanger. He said the council gave the festival a $2,000 grant in May.

Newswanger said the council regularly agrees to fund events before details are finalized, and that usually doesn't lead to any problems. This time was different.

“When we found out that Garrison Keillor was being booked … we expressed our concerns and asked that the funds from the grant that we gave to them not be used for the Keillor appearance,” Newswanger said. “We also asked that our logo and taglines, anything like that, not be used in conjunction with Keillor’s appearance.”

Newswanger said the festival agreed with the council's requests.

The situation arose as the U.S. Senate grapples with the nomination of Judge Brett Kavanaugh to the Supreme Court. Last week, college professor Christine Blasey Ford testified in a charged hearing that Kavanaugh sexually assaulted her when they were both in high school.

Keillor's appearance was planned as other prominent men accused of sexual misconduct in the #MeToo era have been attempting comebacks. Comedian Louis C.K. has given some surprise performances lately that have not been well received. Closer to home, comedian Aziz Ansari performed at the Flynn Center for the Performing Arts last week; he was accused of sexual misconduct in January.

Planned appearances by men such as these raise questions about what happens after a person's conduct has been questioned: Should they ever return to the spotlight?

When the Burlington Book Festival announced the Keillor event in a September 22 Facebook post, the local literary crowd criticized the invite.

Kisonak's statement over the weekend, which criticized Keillor's detractors, didn't do much to smooth things over.

“It's a reprehensible and idiotic response to legitimate concerns about rehabilitating someone who's been accused of sexual predation,” said Barre journalist and blogger Andrew Liptak.

Kisonak said Monday afternoon that the plan to bring Keillor was doing more harm than good.

“As it’s become clearer that there’s a lot of that sort of anger … that’s the last thing I want associated with the festival,” he said.

He said Keillor's staff was sympathetic when he talked to them Monday about canceling.

"The thing was originally offered and intended as a benefit to the festival, and the unfortunate result has been the exact opposite, and they feel very, very badly about that,” Kisonak said.

Correction, October 2, 2018: Keillor was accused of inappropriately touching one woman on multiple occasions. A previous version of this story contained an error.
Prev
Next