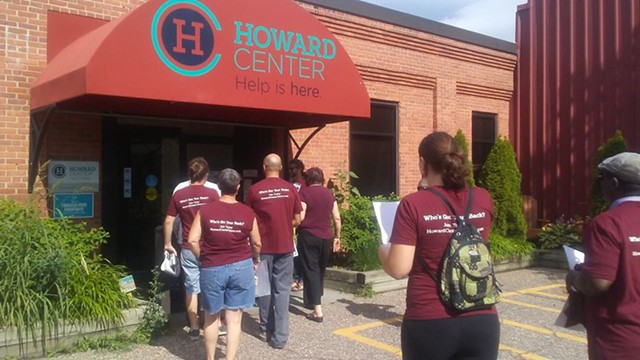 The AFSCME Local 1674 made the allegations in a signed complaint to the National Labor Relations Board, the federal body that enforces labor law and collective bargaining agreements.

In a statement, union president Matt Callahan said Howard Center management discouraged staff from cooperating with a board investigation.

“The most serious of these charges addresses attempts by Human Resources to stifle a NLRB investigation into a charge recently filed by a terminated probationary employee,” Callahan wrote. “Here we assert that Human Resources and Management cannot and shall not order Union workers to refuse to cooperate in Labor Board investigations.”

Howard Center CEO Bob Bick said Monday evening that he was “disappointed” about the complaint “given how hard we’ve worked to come to a fair contract resolution with limited resources to pay for the critical services we provide.”

Bick refused to elaborate on sticking points in the negotiations.

“Better that we express our perspective in the proper venue,” he said.

Callahan’s statement said the union is “working to establish safer staffing ratios, sustainable workloads and livable wages for all our workers.”

David Van Deusen, a spokesman for the union, said representatives plan to stay at the bargaining table.

"Despite these Unfair Labor Practices committed by Howard Center management, the Union continues to bargain with management in good faith and hopes to make significant progress towards coming to a resolution concerning a new Collective Bargaining Agreement in the coming days and weeks,” he said. “We invite management to share this goal with us.”

Howard Center is one of 11 regional “designated agencies” selected by the state’s Department of Mental Health to provide social services and mental health care.
Prev
Next