Greenwood said he doesn’t know how the tweet appeared on his account but confirmed that he deleted it. 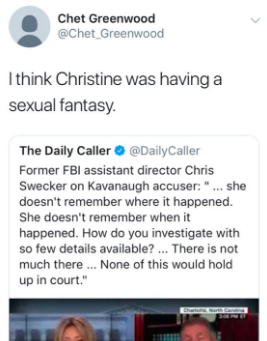 Christine Blasey Ford, a professor at Palo Alto University in Northern California, has said that Kavanaugh sexually assaulted her at a suburban Maryland party when she was 15 and Kavanaugh was 17.

Greenwood — or some unknown person using his account — was commenting on a post from conservative news site the Daily Caller, which pointed out that Ford had not provided many details about the alleged assault.

“I think Christine was having a sexual fantasy,” Greenwood’s full tweet read.

Reached by phone Monday, Greenwood said someone called him about the tweet Sunday afternoon and he deleted it shortly afterward.

“It took me 20 minutes to figure out how to delete a tweet because I’ve never done it before,” said Greenwood, who added that he'd changed his account password after the incident.

Greenwood told Seven Days that he feels "bad for Christine Ford for holding this back for so many years." The GOP county chair went on to accuse Senate Democrats of bringing up Ford’s allegations at a politically convenient time meant to disrupt Kavanaugh’s confirmation process.

“[T]he Democrats held this information three or four months,” Greenwood said of Sen. Patrick Leahy (D-Vt.) and other Democrats on the Senate Judiciary Committee. “If they were concerned, they should have released the information.”

Ford is scheduled to testify Thursday before the Judiciary Committee.
Prev
Next