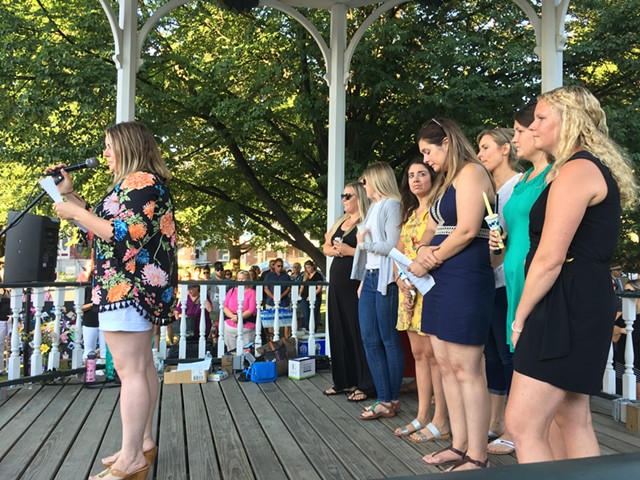 A poster-size photo of Courtney Gaboriault was taped to the base of "Youth Triumphant," the granite statue in downtown Barre's City Hall Park. Flowers and candles were arrayed beneath the photo. People arriving for a Wednesday evening vigil in honor of Gaboriault stopped to take pictures of themselves with the image of the 29-year-old Barre resident, who was killed on the Fourth of July by her estranged boyfriend, Luke LaCroix. He then killed himself.

About 300 people encircled a gazebo as a group of young women calling themselves Courtney's Allies stood around a microphone and shared memories of Gaboriault. Candles, matchbooks, bottled water and packets of facial tissues were available on folding tables nearby. Most were put to good use. People did their best to protect candle flames from a summer breeze that wafted through the park. A donation box for the Central Vermont Humane Society, Gaboriault's favorite charity, overflowed with pet supplies.

Courtney's Allies had organized the vigil as the first step to give meaning to her death. There was no mention of the controversy that had erupted over a Barre-Montpelier Times Argus story that celebrated the killer more than his victim. The paper has published an explanation and apology.

"Courtney deserved this and so much more," said Kate Root, a friend of Gaboriault who had taken the lead in organizing the vigil. "She was the kindest person. She was always putting herself out for other people." And she added, speaking to Gaboriault, "You'll always be a boss babe to me."

Alex Johns, who had been Gaboriault's roommate, took the microphone to celebrate this "amazing, kind, caring, beautiful person" whose greatest loves in life were "her family; her dog, Roscoe; and T.J. Maxx." Johns recounted their frequent shopping trips to the T.J. Maxx in Burlington and speculated that her late friend may have been responsible for keeping the store in business.

Root told the crowd that Courtney's Allies planned to carry on as an organized effort. Those plans, she said afterward, are still being formulated. "We want to continue the conversation about domestic violence," she said. "We don't want Courtney to be remembered solely for what happened to her."

Judging by the community response and the determination displayed by the group of young women who had suffered a deep loss only a few days earlier, it's almost certain we haven't heard the last of Courtney's Allies.

Correction July 19, 2018: A previous version of this story misstated where the T.J. Maxx store is located.
Prev
Next