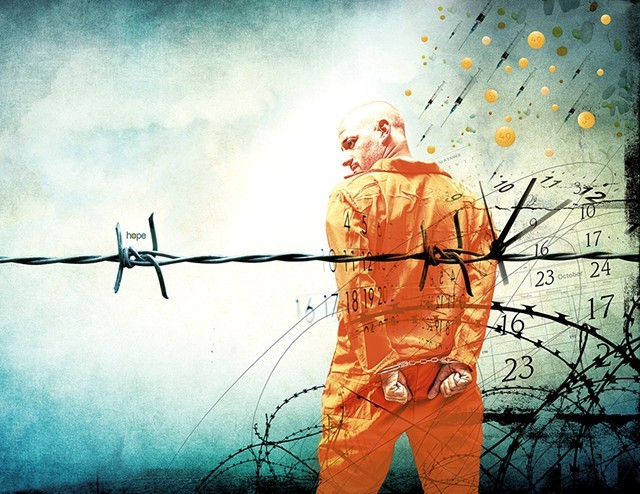 A New York City drug dealer who brought thousands of prescription opioid pills into Vermont was sentenced Monday to nine years in prison.

Michael Foreste, who was profiled by Seven Days in April for his participation in an unusual prison treatment program, told U.S. District Court Judge William Sessions III that his time spent in prison and the counseling he has received in recent months has changed his outlook.

"I now know what these pills do to the community," Foreste said. "I never wish to cause this kind of harm again."

Authorities allege that Foreste, 36, was the mastermind of one of the larger drug-dealing rings in recent Vermont history. He was arrested in 2012 on Interstate 91 with 659 oxycodone pills. After his conviction, Foreste was free pending an appeal when he and his supplier, New York City police officer Andre Clarke,* were arrested in an even higher-profile bust in June 2014. Clarke and another coconspirator took plea deals. Foreste was convicted after a jury trial in October.

Members of Foreste's family and his fraternity brothers from St. John's University, where he obtained a bachelor's degree in psychology in 2003, packed the gallery at U.S. District Court in Burlington on Monday for his sentencing.

His 16-year-old daughter, Jordan Foreste, told the court that her father has been deeply engaged in her life, even during his imprisonment.

"My father has always tried to do his best for me," she said. "He pushed me. It would be nice to have him there to support me and my mother."

Foreste's attorney, Mark Kaplan, asked Sessions for a four-year sentence. And Foreste himself touted his progress in the prison therapy program as he argued for leniency.

"His dealing occurred in that pivotal time when addiction to pain pills was on the rise," Nolan said. "We think he's one of the biggest pill dealers the state has ever seen. He was one of the main drivers of the crisis."

Nolan said she was skeptical of Foreste's claims that he has turned his life around, wondering whether he was simply telling the judge "what he wanted to hear."

Determining Foreste's sentence was "particularly difficult," said Sessions, given that he did not fit the typical profile of many drug dealers. The judge noted that Foreste was not violent or addicted and had a large support system.

But, added Sessions, Foreste had those same things going for him in 2012 when he pledged to straighten out — only to commit new crimes.

"It's an open question as to whether he poses a significant risk of recidivism," said Sessions before handing down his nine-year sentence.

*Correction, May 23, 2017: A previous version of this story misidentified Andre Clarke.