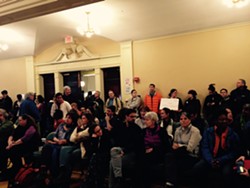 Burlington parents and students lobbed complaints about teacher cuts and lack of transparency at the school board Tuesday night during a packed meeting .

Budget cuts will hit Burlington High School the hardest. It will lose approximately 7.5 teacher positions next year, and its library might be open only 2.5 days a week.

Students said they are already stuck with abundant “dead time” in their schedules because classes they want to take are full. Parents said that their children are sitting in study halls in the auditorium with 45 kids.

“This is unacceptable,” said Clare Wool, a Burlington parent with three children in the city schools, including a son in the high school.

“That horrifies me,” said Jeff Wick, a parent of three younger children, after hearing speakers talk about closed-out classes and dead time at the high school.

“Next year will be much worse for scheduling,” high school sophomore Mary Markley* told the school board. Her guidance counselor has already told her she needs to take fewer classes next year because some of the ones she wants “will not exist,” Markley said. Other students said they have been shut out of classes such as AP biology next year and that they are worried their transcripts won’t be competitive for college admissions.

A special study hall program for struggling students could also go, as could some sections of remedial math.

It was perhaps the largest dose of public criticism for Burlington schools superintendent Yaw Obeng since he started the job in August. Some parents said they would move out of town or put their children in private schools if complaints are not addressed; others said the superintendent and board have kept the public in the dark about the cuts.

Obeng at times looked down glumly during the barrage, and at other moments displayed confidence and a more upbeat expression. He thanked the crowd for coming out and praised Burlingtonians’ passion for education. He also said the scrutiny would help bring about better results.

But he did not back down from the cuts, or from the possibility of shuffling school principals around the district next year, which has also raised controversy. He walked the board, and the crowd, through a long PowerPoint presentation outlining the rationale for the cuts, which are still being finalized. More details are expected in early May.

After a run of big tax increases and big deficits, district officials are digging out of financial problems and are tightening spending.

In order to avoid state penalties designed to curb education spending, Burlington passed an austere budget for next year. Now it’s time to “right-size” the faculty and staff with enrollment trends, Obeng said.

Enrollment at Burlington High School has declined from 1,203 in 2008 to fewer than 1,038 today. But looking at “butts in seats, every single day,” Obeng said, the number is even lower. If you take out students who attend tech center programs and various alternative programs, daily enrollment at BHS is about 944 students, according to Obeng. The high school has some of the smallest classes of the district’s nine schools.

Total district enrollment is declining slowly, although there’s a bump upward at the middle school level.

Other planned cuts include making the librarians half-time at the Integrated Arts Academy at H.O. Wheeler and the Sustainability Academy at Lawrence Barnes. Foreign language instruction could be trimmed.

During his presentation to the school board, Obeng invited four city school principals to join him and talk about how they worked as a team to minimize the impact of the cuts.

He did not invite Burlington High School principal Amy Mellencamp to be part of the presentation, though she was present and the high school was the focus of many comments. Nor did Mellencamp speak during the public forum portion.

During a brief interview with Seven Days, Mellencamp said dead time at the high school has been an issue due to teacher cuts that have already taken place. Asked if she expected to be reassigned under a principal shuffle, Mellencamp said she had not been specifically told of any new assignment.

Mellencamp said she’s planning to retire in June 2017, and ideally would like to finish out her career at the high school, where she has been principal for 17 years. But if asked to switch schools, Mellencamp said, she would do what’s needed to be a team player for the district.

Before the meeting started, parent Chip Hart said anxiety is high among parents about cuts and budgeting. “People are feeling really left out of the process,” he said.

*Mary Markley's grade at Burlington High School  was incorrect in an earlier version of this post.