Minter and Galbraith Release Tax Returns, Net Worth | Off Message

Democratic gubernatorial candidate Sue Minter released her 2015 tax return Thursday, along with a list of financial assets and an estimate of her family’s net worth. The move prompted fellow Democrat Peter Galbraith to disclose similar information, though his was partial and not entirely up to date.

Minter and her husband, David Goodman, reported $152,068 in income last year. The candidate made $67,891 in her position as state transportation secretary before resigning last September to run for office. Goodman, a journalist, reported $42,738 in earnings. According to the campaign, their combined assets are worth $1.37 million.

Galbraith and his wife, Dr. Tone Bringa, reported $571,133 in income in 2013 and $599,609 in 2014. His campaign manager, Ian Moskowitz, said the candidate planned to file for an extension for his 2015 returns but would release his estimated tax payments before then.

Candidates and officeholders in Vermont are not required to disclose personal financial information, though it has been customary for gubernatorial candidates to do so.

Republican Bruce Lisman was the first 2016 candidate to provide a detailed look at his finances last December. He reported $1.3 million in income in 2013 and $1.7 million in 2014. The retired Wall Street banker pegged his net worth at $50.9 million. His campaign manager, Shawn Shouldice, said Thursday that Lisman would not file his 2015 return until October.

Spokespeople for the remaining candidates — Republican Lt. Gov. Phil Scott and Democratic former state senator Matt Dunne — said their bosses would release their 2015 returns and lists of assets within the next two weeks.

In addition to distributing her tax documents, Minter voluntarily filled out a federal financial disclosure form required of members of Congress. In it, she listed each of the couple’s assets worth $1,000 or more and a general range of their value. According to her campaign, which later Thursday provided more precise figures, those include:

Their liabilities include a mortgage on the house worth somewhere between $100,001 and $250,000, according to the documents.

In addition to $4,846 in dividends, Minter and Goodman reported $20,877 in capital gains. Campaign manager Molly Ritner attributed the latter to the couple’s ongoing efforts to divest themselves of oil and coal investments. 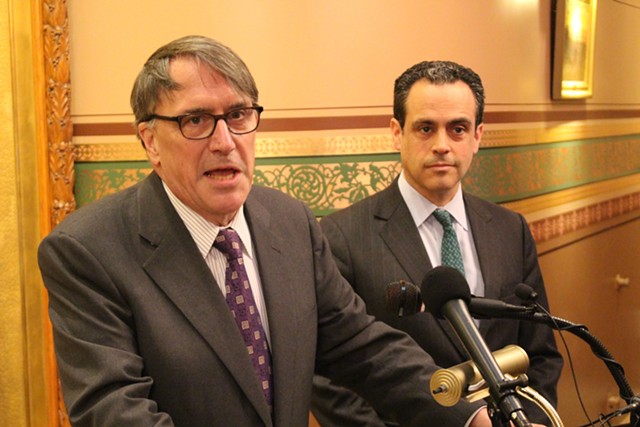 Galbraith and Bringa appear to generate most of their income through investments. In 2014, they reported $213,811 in dividends, $171,550 in capital gains and $121,130 in taxable interest. They earned $87,119 in wages and salaries that year. According to Moskowitz, that came from Galbraith’s Senate salary, his consulting business and his writing, as well as Bringa’s salary from Norway’s University of Bergen, where she is an associate professor of social anthropology.

Galbraith’s campaign provided what it called “a preliminary list of assets” and pledged to release a more comprehensive one later. The list does not include the specifics of most of the couple’s investments but outlines them in several broad categories:

According to Moskowitz, Galbraith’s 2015 tax return will look similar to his previous ones, except that Bringa is no longer a US permanent resident, so she and Galbraith cannot file a joint return.