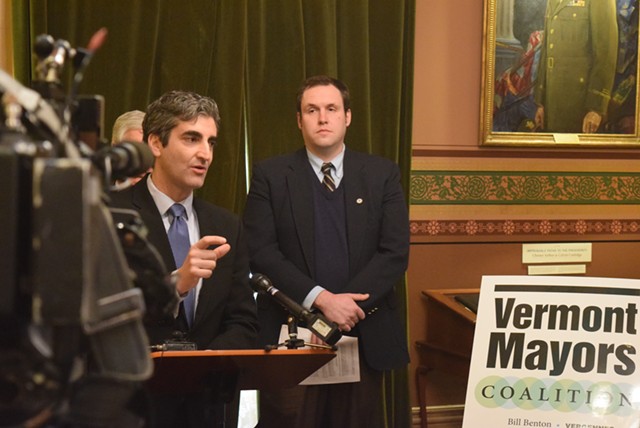 “It’s certainly by far and away the will of the Burlington voters,” said Rep. Mary Sullivan (D-Burlington), who is among those championing three bills in the legislature that contain the items Burlington voters overwhelmingly approved.

Sullivan and other Burlington House members have won a daylong hearing next Thursday before the House Government Operations Committee. Mayor Miro Weinberger is lobbying for support of the measures, citing renewed need after a fatal shooting outside the Zen Lounge in downtown Burlington in December. The Burlington City Council this month passed a resolution urging the Legislature to reconsider the issue.

“I’m going to push hard,” Weinberger said, while visiting the Statehouse last week. He has the backing of Vermont’s seven other city mayors.  Though the Vermont Mayor’s Coalition has not taken a stance on Burlington’s charter changes themselves, the group made a statement in support of the city’s right to do what it believes is necessary to protect public safety.

Sullivan said support for the changes is growing in the House. Rep. Joanna Cole (D-Burlington) said the number of co-sponsors has grown from 12 to more than 25.

Despite the renewed push, the changes to Burlington’s charter still have a steep hill to climb.

Rep. Donna Sweaney (D-Windsor), chair of the committee, said she’s made no promises about the bills’ prospects and remains personally opposed. “I have real issues with doing this kind of legislation town by town," she said. "I think this is a statewide issue.”

Last year, Sweaney’s committee dismissed the charter changes as constitutionally questionable and never sent them to the House floor for a vote.

House Speaker Shap Smith (D-Morristown) indicated the charter changes are likely to fail if they make it to the full House, which has long been reluctant to tackle gun control. “My advice to the people who want to move the issue forward is to bring a bill to the floor and watch it die is not the way to do that,” Smith said. “It depends on whether you want to play a short game or a long game.”

Vermont law contains a Sportsmen’s Bill of Rights that prohibits municipalities from regulating firearms. Smith, a lawyer, said he continues to see that as a barrier to Burlington’s charter changes.

Weinberger disagrees, arguing that Burlington’s desire to protect the public’s safety has nothing to do with sportsmen.

The Vermont Federation of Sportsmen’s Clubs is poised to fight the charter changes as it did last year. “This legislation is not just about guns in Burlington,” the group said on its website this week. “It’s about Vermont municipalities killing our Vermont Sportsmen’s Bill of Rights.”

But Burlington will get a hearing on the issue. Sweaney said next Thursday’s committee meeting will be almost like a public hearing, with the panel listening to those who sign up to testify.

The city has rewritten last year’s charter change bills, so they are not identical to the bills that failed last year, though they seek to accomplish the same goals. In addition to banning guns in bars, Burlington voters are asking to allow police to confiscate guns in domestic violence cases and require residents to lock up guns when not in use.

Among the issues Sweaney’s committee will consider, she said, is whether a municipal charter change can legally have a second try in the legislature without a new vote by the community.  Sweaney, who’s been in the legislature since 1997, said she doesn’t think that’s happened before.