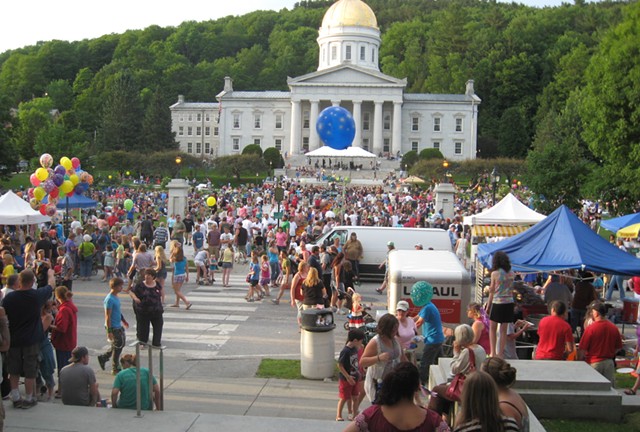 Local Boy Scouts won't be selling bottled water or volunteering on the clean-up crew for Montpelier's July 3 parade this year. The reason?

City councilors earlier this month balked at approving a vendor request for the Scouts, citing unease about the Boy Scouts of America's national membership policy banning gay and lesbian scout leaders from the organization. The council tabled what would have otherwise been a quick approval and invited the Scouts to return two weeks later to discuss the application.

The Scouts declined that invitation — and pulled their application to be a vendor at the parade. Now the group of Scouts, which included two troops and one co-ed "venturing crew," have decided against volunteering for the clean-up crew after the parade, too. The Scouts have been involved for the last three years, but after the city council kerfuffle, "we're going to steer clear of Montpelier for awhile," said Leslie Sanborn, a Barre resident and longtime volunteer with all three scouting groups. "It's left a very bad taste in our mouths."

The Scouts aren't the only one who feel that way. Yesterday, Associated General Contractors of Vermont pulled its longstanding donation of safety vests and cones from the event, citing dissatisfaction with the city council's treatment of the Boy Scouts. Casella Waste Systems and the local sheriff stepped in with safety equipment to fill that gap. City councilors and other community volunteers are stepping up to fill the shoes left behind by the Scouts, said Ashley Witzenberger, the executive director of the event's organizer, Montpelier Alive.

"We're just trying to put on a really great day for the whole community," said Witzenberger, who expressed appreciation for the Scouts' hard work in the past and disappointment at the fall-out from the debate. The July 3 parade is the organization's largest event, and pulls more than 20,000 people to downtown Montpelier.

Meanwhile, the back-and-forth has touched off angry phone calls to Montpelier Alive, comments of support to the city council member who raised objections to the Scouts' policy — and a flurry of letters to the Barre-Montpelier Times Argus. At the heart of the debate is this question: Just how much does a national policy barring openly gay Scout leaders matter on the ground in Vermont?
"I thought, 'Let’s send a message to the Boy Scouts headquarters,'" said Thierry Guerlain, the City Council member — and former boyhood Scout — who first raised objections to what otherwise seemed like a straightforward item on the consent agenda at the council's June 11 meeting.

Guerlain said he didn't realize at the time that the Scouts volunteered for clean-up duty at the event. He simply had concerns about what it meant for the city to be endorsing an organization with a policy he called "abhorrent and outdated."

As for the Scouts' decision not to participate in the event?

"They went from teaching the boys discrimination to also teaching them spite," said Guerlain, who called the decision not to volunteer at the event a "spiteful move" on the part of local Boy Scout leaders. "I’m surprised that we’re even discussing the fact that it’s more important to get the trash picked up conveniently by the Boy Scouts than to respect the civil rights of lesbian and gay parents who are disinvited from the Boy Scouts."

The City Council didn't outright reject the Boy Scouts' application on June 11; the council asked the Scouts, or parent or volunteer representatives from the troop, to return on June 25 to discuss the national membership policy.

Ed McCollin, who heads up the Vermont chapter of the Boy Scouts, said parents didn't want to put their kids in the middle of a debate about national scouting policy. That policy changed partly last year, when the Boy Scouts of America agreed to allow openly gay youth participate as Scouts.

"At the end of the day, there wasn't much for us to say," said McCollin. "The policy on the membership standard is a national policy. It is something that has been controversial and divisive among the Boy Scouts as a nation."

But as long as the national membership policy stands, McCollin added, he's bound to uphold it. That plays out to a sort of "don't ask, don't tell" practice in Vermont. McCollin said that, in surveys conducted among Vermont Boy Scouts, leaders and volunteers in 2013, roughly 75 percent of Vermont members wanted to see that "divisive" policy struck from the books altogether. The national policy has hurt Vermont Boy Scouts when it comes to fundraising, McCollin said. "'We love the Boy Scouts, but...' I get that a lot," said McCollin.

Sanborn, who volunteers with the local troops in Montpelier, said the troops decided to withdraw their permit to sell bottled water after "it became apparent that there was a hidden agenda here" and that the city council was an "obviously biased group." As for the decision not to volunteer this year on clean-up? Sanborn said that there was a feeling of, "OK, we're good enough to pick up their trash, but we're not good enough to sell them a bottle of water?"

"We felt rejected," she said. "We will not go where we're not wanted."

Meanwhile, city clerk John Odum called the situation "frustrating" in the way it played out. He pointed out that the city council merely tabled the Scouts' request, and didn't outright reject it.

"The local scouting organization simply walked away and slammed the door on their way out," wrote Odum in an email to Seven Days. "Just think of the messages they are sending to the kids themselves by just walking away at the first hint of a difference of opinion: that its OK to angrily dismiss others' deeply held beliefs, OK to walk away from commitments, and that its fine to stand by while homophobic comments are being spread, supposedly on their behalf."

"We applaud those city leaders who were brave enough to step forward and refuse to put the Montpelier community’s seal of approval on discrimination," said Pride Center director Kim Fountain, noting that the center planned to alert its membership that volunteers were needed to take the spot of the 20 to 30 Boy Scouts who typically volunteer at the Montpelier Alive celebration.