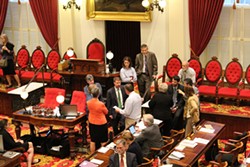 The Vermont House voted 132 to 3 Friday night to raise the state's minimum wage from $8.73 to $10.50 an hour by 2018. Having passed the Senate, the legislation now goes to Gov. Peter Shumlin, who said after the vote that he would be "proud to sign it."

"I thank the legislature for doing the right thing for working Vermonters by raising the minimum wage," Shumlin said in a written statement. "Everyone who puts in a full day's work deserves a paycheck that will give their family a fighting chance."

The nearly unanimous vote came at the end of a hectic day in the Statehouse, during which legislators signed off on a final budget deal and worked late into the night to agree on a tax bill. Earlier in the evening, the Senate narrowly summoned enough votes to take up and pass legislation regulating toxic chemicals; that bill, too, now goes to the governor.

So long as House and Senate negotiators reach agreement on the tax bill by the end of the night, the legislature will remain on track to adjourn Saturday night.

The final plan, initially drafted by the Senate, raises the minimum wage at a slower rate through 2017 than competing proposals drafted by Shumlin and the House. But it goes further than those alternatives in 2018.

The House voted in April to make the jump to $10.10 in a single year. But on Monday, the Senate rejected that plan and passed a far slower alternative. On Thursday night, the House attempted to adopt a compromise plan negotiated by the administration and legislative leaders, but a technical error forced the body to abandon that effort.

With the adjournment clock ticking, House Democrats' options were limited. On Friday, House Minority Leader Don Turner (R-Milton) said he would suspend the rules and take up a minimum wage bill, but only if the House concurred with the Senate version.

"Coming here in January, I never thought I'd be voting for raising the minimum wage," Turner said on the floor Friday night.

But after months of debate, he said, "it became more and more of a reality that we had to do something." Turner said that while it "may not be perfect," the Senate version "does strike a balance that all can live with: the employee who works for minimum wage and the employer who has to make those paychecks each week."

Republicans were joined in supporting the bill by a coalition of liberal Democrats, Progressives and independents who tried in vain Thursday evening to increase the minimum wage at a faster rate.

Rep. Paul Poirer (I-Barre City), who fought Thursday for a two-year jump to $10.10 an hour, said he'd finally come around.

"Last night I would have totally opposed this plan. My stubbornness would have gotten in the way," he said.

But after "a good night's sleep," Poirer said, he realized that, "Sometimes, Mr. Speaker, we have to sit back and look at the big picture."

Majority Leader Willem Jewett (D-Ripton), who strongly opposed Poirer's amendment on Thursday, saluted what he called a "good, full and robust debate." He called Friday's vote "one of those Vermont House moments where we all come together on a tough issue."