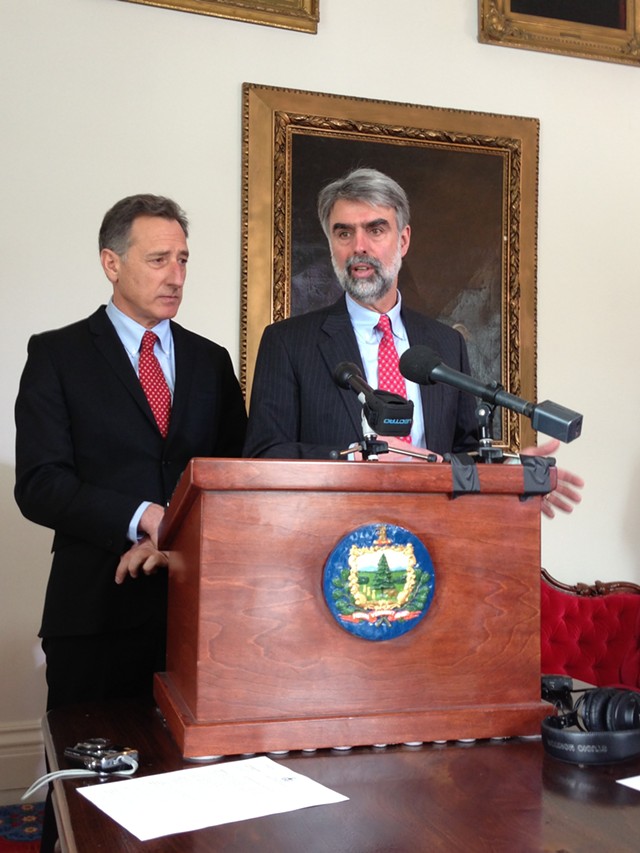 Chief of staff Elizabeth Miller, deputy chief of staff and spokeswoman Sue Allen and legislative liaison Louis Porter all plan to leave the governor's office by the end of the month, administration officials confirmed late Sunday.

It's unclear whether the changes on the fifth floor of the Pavilion State Office Building are the result of a house-cleaning, a staff insurrection, or are mere coincidence. Just last week, the architect of Shumlin's single-payer health care plan, Anya Rader Wallack, announced she will step down in September as chairwoman of the Green Mountain Care Board.

Elizabeth Miller, a Burlington lawyer who served as Shumlin's secretary of public service before taking over as chief of staff in January, plans to join Green Mountain Power as vice president of a new solar division. She'll be tasked with implementing the company's ambitious plan to build an 18-megawatt solar farm on state land on the southern and western slopes of Camel's Hump.

"We're excited to be joined by such a talented and dynamic leader," said GMP spokeswoman Dotty Schnure, who confirmed the hire. "Plus, it's been about 10 months since we've hired someone out of state government."

Though Allen and Porter will no longer be working for the governor, they'll continue to work together. Both are rejoining their alma mater: the Barre-Montpelier Times Argus.

Allen, who previously served as the paper's top editor, will take that role again, according to Times Argus publisher Thom Lauzon. Allen will be charged with coordinating the merger of the Times Argus and its sister paper, the Rutland Herald, with Vermont Public Radio, the Burlington Free Press and VTDigger.org. The combined entity is tentatively being called the VermontPressHeraldArgus.org.

Porter — a former chief of the Vermont Press Bureau, which provides Statehouse coverage to the Times Argus and Herald — will rejoin the beleaguered entity and supervise the consolidation of all Statehouse bureaus into one. He'll also pen a Sunday outdoors column for the TA called, "Floatin' with Louis."

"People keep saying I've gone through the revolving door," said Porter, who joined the Shumlin administration in December as secretary of civil and military affairs. "Well, now I really have. Just not as often as Sue."

In perhaps the most surprising move of the Shumlin shakeup, the governor's human services secretary and one-time political rival is planning to join a prominent business advocacy group in early May. Racine, a former lieutenant governor and state senator, has been hired by the Vermont Chamber of Commerce as its chief legislative lobbyist.

"We've been truly impressed by Sec. Racine's recent commitment to holding the line on new revenues and ensuring that Vermont businesses can compete in the 21st century," explained Chamber president Betsy Bishop. "Doug understands that it's time for low-income Vermonters to pay their fair share."

Racine isn't the only cabinet member on his way out the door.

Commerce Secretary Lawrence Miller confirms that he'll be joining Anheuser-Busch to assist in its planned corporate takeover of three Vermont breweries: Hill Farmstead, Lawson's Finest Liquids and the Alchemist. Miller, who founded Otter Creek Brewing, tells Seven Days he's looking forward to returning to an industry in which daytime drinking is even more acceptable than politics.

Not everybody in the Shumlin administration is planning to leave. Secretary of Administration Jeb Spaulding said early Monday he's staying put.

"Why would I leave? I love being governor! Ahem, I mean, administration secretary," Spaulding said. "Anyway, I'm the only one around here who does any work."

Spaulding says it's too soon to say who will replace his departing colleagues, though he hinted that several former Douglas administration officials are being considered. He added that former Essex and Orleans state senator Vince Illuzzi has already applied for all five vacant positions. A confused-looking former state auditor Tom Salmon also recently showed up at the Pavilion with copies of his resume, Spaulding said.

One top contender to replace Allen as gubernatorial spokesperson is Green Mountain Daily's John Walters, whose experience carrying water for Vermont Democrats would make him a perfect fit. Walters has also pledged to work without pay from his mother's basement.

Administration officials declined a request from Seven Days Monday morning to interview Shumlin about the situation. According to Allen, the governor and Jay Peak owner Bill Stenger are en route to New Jersey in the state-owned Cessna to entice overtaxed millionaires and billionaires to purchase EB-5 visas and immigrate to Vermont.