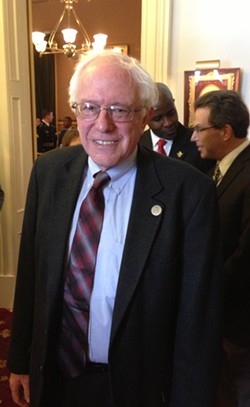 Breaking with the Democrats with whom he caucuses, Sen. Bernie Sanders (I-Vt.) said Thursday he would oppose President Obama's nominee for treasury secretary.

In a sharply-worded statement, Sanders criticized Obama's pick — Jack Lew, who currently serves as White House chief of staff — for his ties to Wall Street and corporate America.

"As a supporter of the president, I remain extremely concerned that virtually all of his key economic advisers have come from Wall Street," Sanders said in a written statement. "In my view, we need a treasury secretary who is prepared to stand up to corporate America and their powerful lobbyists and fight for policies that protect the working families in our country. I do not believe Mr. Lew is that person."

If confirmed by the Senate, Lew would replace outgoing Treasury Secretary Timothy Geithner.

Lew's long resume includes stints as budget director in both the Clinton and Obama administrations, as well as nearly two years as deputy secretary of state. But it's the two years Lew spent at Citigroup in the run-up to the 2008 financial crisis that appear to have drawn Sanders' ire.

As the Washington Post noted Thursday, Lew headed up a unit at Citigroup in charge of "the bank's riskiest operations, including its hedge funds and private equity investments." Losses in that unit were largely responsible for Citigroup's embrace of a $45 billion federal bailout.

Sanders appears to be the first and only left-leaning senator to oppose Lew's nomination. The Vermont senator's ideological opposite, Sen. Jeff Sessions (R-Ala.), has also committed to voting against Lew, but Sanders acknowledged in his statement that Obama's nominee would likely be confirmed.

Sen. Patrick Leahy (D-Vt.) is one Democrat who definitely will back Lew.

"He supports the nomination," says Leahy spokesman David Carle. "Few if any issues ahead will be as difficult as the deficit reduction process. As a former White House budget director and chief of staff, Jack Lew has deep and unequaled experience and knowledge about budgetary matters, and those qualifications will be crucial assets for the next Treasury secretary. His confirmation hearings are an opportunity to sharpen the focus on these issues."

Update: In case you're curious, this wouldn't be the first time Sanders opposed an Obama appointee. In fact, Sanders opposed Lew when he was nominated to lead the Office of Management and Budget (though that was a voice vote). He also voted against Geithner.

Here's a list of other top Obama appointees Sanders' office says he opposed: