Out in the Mountains Now Out Online | Live Culture

Out in the Mountains Now Out Online 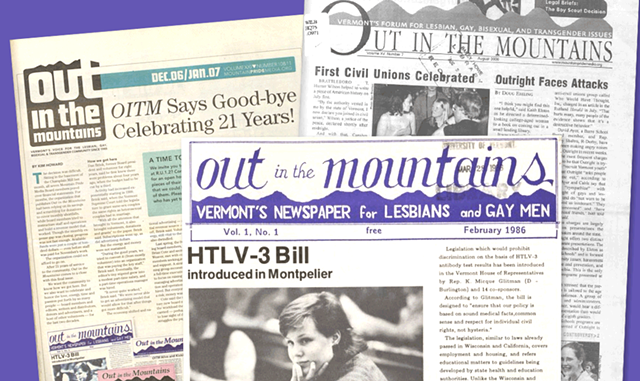 In February 1986, the first issue of Out in the Mountains: Vermont's Newspaper for Lesbians and Gay Men hit mailboxes, corner stores, coffee shops and other rural newsstands. The free monthly newspaper would continue to serve Vermont communities for more than 20 years, folding in 2007 due to financial difficulties. Now, thanks to the University of Vermont's Center for Digital Initiatives, the entire Out in the Mountains archive can be accessed online.

"Not too many papers like [this] have been digitized," said Prudence Doherty, public service librarian for UVM's special collections. "Certainly it has Vermont significance," she said, "but it [also] has much wider significance and will be used by people who are tracking the history of LGBTQ movements."


The seeds for an OITM digital archive were first planted in March 2015. "A couple of us were using it with classes," Doherty said. "We thought it was such a rich resource that we really wanted it to be available to more people."

Doherty met with several others to discuss the feasibility of digitizing the university's complete hard copy archive: Amber Billey, also a representative of the UVM Libraries; Fleming Museum registrar Margaret Tamulonis (in her capacity as curator of the Vermont Queer Archives); and Kim Fountain, then director of the Pride Center. When OITM closed, its nonprofit parent company Mountain Pride Media ceded the paper's copyright to the Pride Center (then the R.U.1.2? Community Center) — meaning the Pride Center needed to sign on to the archive's digitization.

The Pride Center completed a formal agreement in January 2016. From here, UVM archivist and CDI coordinator Chris Burns oversaw the technical logistics of scanning and hosting the archive online.

The archive went live in January this year. As former editor Barbara Dozetos put it, "All hell broke loose when we found out. [We were] tagging everybody we could think of who would care, and it went like wildfire on Facebook.

"It [had] not been available for anybody to see for a long time, which [was] heartbreaking to us," Dozetos continued.  She served as the paper's editor from 1998 to 2000, during the height of state controversy about civil unions — which ushered in a period of financial success, as well as its share of stressors. "I got some gray hair," Dozetos joked. The archive can be accessed here. The Pride Center will host a gathering on April 2 to celebrate the archive's digitization, details forthcoming.