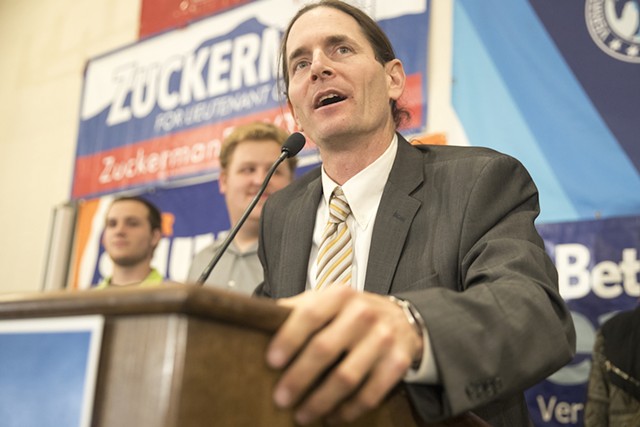 Former lieutenant governor David Zuckerman is once again the Democrats' choice to run for the state's second-highest office after besting three other lesser-known candidates in Tuesday's primary.

Zuckerman, who served as LG from 2016 to 2020 before an unsuccessful run for governor, received 42 percent of the vote with 90 percent of districts reporting.

He edged out former Danville representative Kitty Toll, who received 37 percent of the vote despite raising more money than Zuckerman.

Zuckerman, a Progressive who was endorsed by U.S. Sen. Bernie Sanders (I-Vt.) and left-leaning environmental and labor groups, demonstrated that he remains a force in Democratic politics despite his crushing loss to Gov. Phil Scott in 2020.


"I am confident they will work hard to combat the existential threat of climate change, establish universal health care, lower the cost of prescription drugs, create good paying jobs in Vermont and protect American democracy," Sanders said in a statement. "I congratulate all of them on their strong victories tonight."

While some in the Democratic establishment backed other candidates in an effort to elevate a more centrist candidate to the largely ceremonial post, Zuckerman's victory served as a testament to the power of incumbency, name recognition and a network of volunteers built over more than 20 years in public office.

Zuckerman, a farmer from Hinesburg, said he felt grateful to have been tapped for another run at his former job and said he felt good about his chances in November. But ultimately, it's not about him, he said: It's about the people who are sleeping outside, the people working 60 hours a week to make ends meet and the young people fighting "for a planet that is on fire."


"Some of us have been fighting for these things, but we have also failed," he told Seven Days from a watch party in Burlington. "If we don’t address them, there is real trouble on the horizon. In fact, the horizon is already upon us."

The results mean Zuckerman will face off in November against state Sen. Joe Benning (R-Caledonia), who fended off a surprisingly strong challenge from right-wing candidate Gregory Thayer of Rutland.

A proud Trump supporter who attended and later downplayed the January 6 Capitol riot, Thayer ran on an anti-abortion, pro-police, parents-rights platform. He raised a mere $2,400 for his campaign but still managed to draw 40 percent of the vote. Benning earned 49 percent of the vote, with 90 percent of districts reporting results.


The primary results also clarified the November matchups for other statewide races, including governor.


Incumbent Gov. Scott handily beat little-known challengers Peter Duvall and Stephen C. Bellows in the GOP primary. He earned 66 percent of the vote, while Bellows received 18 percent and Duvall 12 percent, according to results recorded with 90 percent of districts reporting.

Because of his moderate stances on issues such as gun control and his generally positive record of handling the pandemic, Scott has regularly polled as one of the most popular governors in the nation.

He’ll face Democrat Brenda Siegel and Progressive Susan Hatch Davis in the November election. Both Siegel and Hatch were unopposed in their party’s primaries.

Contacted outside the Democratic Party's festivities at Zenbarn in Waterbury, Siegel said she knows it will be difficult to beat Scott in the fall but she's never shied away from a fight.

On the housing crisis, the opioid crisis and the climate crisis, Siegel said voters know the state can do better.

"If we tell people in Vermont the truth about what is happening, they are with us," she said. Mike Pieciak, the former commissioner of the Department of Financial Regulation, also ran unopposed and will be the Democratic nominee for treasurer. In a statement after the polls closed, he thanked Treasurer Beth Pearce for her support and said he was honored voters backed him.

"I am humbled voters have put their trust in me, and I look forward to building a broad coalition to win in November and tackle the issues facing all Vermonters," Pieciak said.


Also running unopposed were H. Brooke Paige in the Republican primary and Don Schramm in the Progressive primary.

State Auditor Doug Hoffer ran solo in the Democratic primary, while Marielle Blais ran unopposed for the Progressive line, as did Paige in the Republican contest.

Of all the statewide races, the lieutenant governor's race proved the most expensive by far. The candidates combined to raise nearly $670,000.

Toll said she was proud of the race she ran and the communities she was able to visit around the state.


"Obviously I am disappointed in the results tonight, but this is democracy," Toll said.

Toll was well known in Democratic political circles from her 12 years in the state House and time as chair of the powerful House Committee on Appropriations. But she acknowledged that she lacked statewide name recognition. She sought to overcome that deficit with multiple television ads and an aggressive campaign schedule that saw her crisscrossing the state.

Preston, executive director of the Vermont Council on World Affairs, also ran a vigorous campaign, tapping into her network of supporters around the state and raising $140,000.

"Even though we didn't win tonight, I think we won in the long run," she said, adding that she felt good about the momentum her campaign built despite the result.

Kimbell, the most conservative Democrat in the race, pulled in $76,000. He campaigned, in part, on rehabilitating older buildings to create new housing around the state. The idea, which he dubbed the Phoenix 251 Project, called for tax credits and other ideas to ensure at least one building was fixed up in every town in the state.