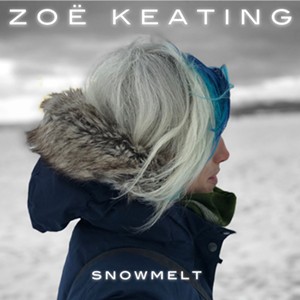 Zoë Keating's four-song EP Snowmelt begins with a sad, solitary cello line. Having established a lonely, windswept musical terrain, the sound shifts to a pulsing beat overlaid with apparent guitar plucking. Yet it's all done with the cello: Keating is a solo electronic cellist who uses an instrument mic, a laptop and foot pedals to create her looped and layered, three-to-five-minute pieces.

This will come as a surprise to no one, I imagine. Keating, a former member of the acclaimed cello-rock band Rasputina, has a global following of more than a million, with whom she is in constant contact via social media and her blog. Through the latter, fans learned of her husband's death from cancer in 2015 and her move, with her young son, from California to Vermont in 2017 — Keating's sister lives here. That sadness in her music is real.

As in the opening song, "Forte," beats appear from the ether in two other pieces, without defining them. "Possible" builds from an ascending three-note unit, repeated with an increasing intensity, to an interlude of suspended action, as if Keating were fortifying herself for the rhythmic climax. She composed the piece to end her 2017 TEDMED talk, a moving and honest recounting of her loss, and the power of music to overcome it.

"Nix," the final song, begins as a halting, evanescent lullaby of bell-like sounds Keating created using her son's toy musical instruments. It grows minimally beat-centered before calming to a slow, repeating four-note descent on the cello alone, as if the child has fallen asleep.

Only the second song, "Icefloe," eschews a beat — though it, too, has rhythm. The song that sounds most like a string ensemble, it layers ascending glissandos, remotely placed, over ethereally high notes. Like all of her music, this piece seems to contain a narrative: It evokes a stirring under the ice — and perhaps an awakening from pain.

Keating has somehow gained the inaccurate moniker "avant-garde." Unlike, say, the classification-defying electronic strings music of Tod Machover or the younger Joseph Di Ponio's atonal compositions, her songs center on mainstream chord progressions and four-four time — the stuff of Irish fiddle music and pop songs. Then she makes of these familiar elements something unearthly and lingeringly beautiful.

Keating's concerts are experiments in improvisation — and one hopes her Vermont appearances will increase with her residency. In a recent interview with Vermont Public Radio, she said of performing live, "You don't know what the result is going to be until you're doing it, because all those layers of cello together change the outcome." Snowmelt, by contrast, is structured and polished, yet no less emotionally raw.

Snowmelt is available at music.zoekeating.com.