Getting some major air at Smuggs with the treetop zip line 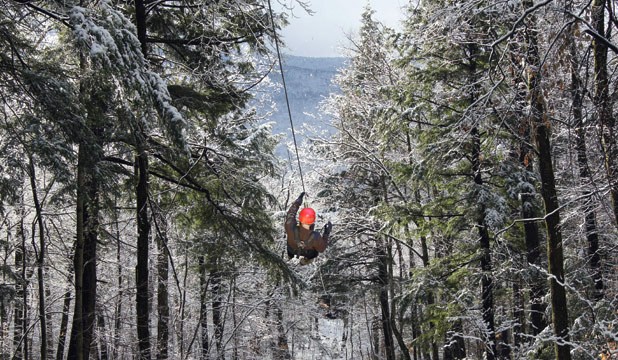 That’s the sound of me on the new zip line at Smugglers’ Notch. It’s a decidedly youthful utterance and one that shocks me as it escapes my mouth. As adults, we’re typically discouraged from such joyful vocalizations.

But I’d venture to say that most adults who traverse the trees on the thin metal cables strung high above the forest floor at Smuggs would be prone to similarly enthusiastic exhortations. Perhaps a wild “Yahooooo!” or even a Deanian “Yeeeeahhhh!” There’s something about swinging above the ground in a place for which human beings aren’t physiologically suited that conjures the salad days of elementary school.

In these tough economic times, with all that other bleak stuff going on, who doesn’t need a little youthful release? I, for one, welcome the chance to channel my inner child. Thanks to ArborTrek Canopy Adventures, Vermont’s first four-season zip-line operation, acting like a kid is as easy as strapping yourself into a harness and stepping off a platform.

ArborTrek, which opened the day after Christmas, takes visitors on a three-hour zip-line tour of the Smuggs forest. The tour wends its way through 15 acres of undeveloped land in the valley below the ski resort. Over the course of eight rides of various lengths, spanning a linear distance of more than 4500 feet, participants zip past a jagged ravine, a rushing brook, and stands of proud hardwoods such as beech, birch and sugar maple.

Naturally, I had to try this.

Thanks to dumb luck, I picked the perfect day for the canopy tour. Flecks of fluffy snow floated down from the sky, and the temperature was a reasonable 28 degrees. I could experience all the wintry beauty without having to sacrifice a toe or two in the process.

ArborTrek is the brainchild of Mike Smith, a zip-line course builder with 15 years of industry experience. In 2009, with the support of a silent financial backer, Smith set about building a national zip-line brand. After looking at 100 sites around the country, he settled on Smuggs because of the resort’s terrain and existing array of programs. ArborTrek at Smuggs is the first of a dozen zip-line operations Smith hopes to build in the U.S.

Our afternoon tour began with a brief safety check, courtesy of lead guide Jason Guess. Once my group of six got all buckled into our harnesses, it was time for a test run behind ArborTrek’s Jeffersonville headquarters.

Guess, a stout and cheery 30-year-old, gave the group a little Zip Line 101 before we got on the real course. He looked every bit the part of forest guide with his bushy red beard dappled with snow and ice. Despite the chilly climes, his fingers remained gloveless. When asked, he attributed his heartiness to the long line of New Hampshire farmers from which he is descended.

During our practice run, we learned what a trolley is (the apparatus that glides along the cable and is hooked to your harness); where to put our hands (left over right on the trolley); how to brake (left hand pancaked against the cable behind the trolley); and what to do if we stopped before the end of the line (turn ourselves around and pull ourselves backward along the cable).

Then it was on to the long course, which features eight zips, two rappels and one sky bridge. Smith served as tour bus driver for the two-mile haul to the start.

The first zip looked pretty tame, running down over a little gully to a platform in the trees about 100 feet away. Our other guide, Rhonda Sandweiss, a 42-year-old Michigander who is helping Smith launch ArborTrek, hooked our trolleys onto the cable one by one.

When it was my turn, Sandweiss reminded me of what I had to do — sit in the harness, left hand over right, legs up, brake when I was told. Oh, and have fun. Then I was off.

When you’re on a zip line, unless you have a paralyzing fear of heights, you cannot help but smile as you whiz through the trees. Though you’re buckled and strapped and harnessed to within an inch of your life, there’s a certain feeling of freedom that comes from dangling over the earth on a slender steel cable. It’s fleeting, for sure — each ride is less than a minute long — but exhilarating.

Plus, the rides show off the majesty of the northern forest during a Vermont winter. Boughs of hemlock and poplar sag beneath the heft of new snow. The untouched ground ripples in waves of fresh powder. Tree hollows reveal cozy homes for porcupines or opossums. The scenery alone is worth the $99.95 price tag.

The landing for each ride is a circular wooden platform built around a tree, just below the cable anchorages. Once you are unclipped from the zip line, you are immediately hooked onto another safety line leashed around the tree. At no point are participants ever untethered on platforms.

This is a good thing, since none of the platforms have guardrails — by design, Guess told me. ArborTrek wanted participants to feel part of the forest, not penned off from it. If you’re daring, you can lean backward at the platform’s precipice and feel like you’re tempting fate.

At the first platform, Guess informed the group he was happy to provide forest interpretation. Alternatively, he said, if we wanted him to just “shut up and be an amusement park ride operator,” he could do that, too. The group chose the former, and happily listened to Guess’ dendrological trivia.

The next two zips were progressively steeper and longer than the first. That design helps participants work up the nerve to do the faster lines that come in the middle of the tour, like zip number 4.

From its vertiginous launch platform, zip number 4 is by far the most panic inducing of all the lines. At nearly 75 feet above the ground and 850 feet long, it’s the main attraction of the tour.

If you don’t look down, the idea of launching yourself off the platform doesn’t seem so daunting. But, of course, you have to peer over the edge. Knowing just how high off the ground you are is one of the thrills of zip lining. Though on zip number 4, you’ll wish you’d never sneaked a peek.

I should note that, while I am not afraid of heights, I hate the feeling of dropping. I live by the notion that one’s stomach should never migrate north of its home in the belly. I don’t ride roller coasters, and, though I bungee-jumped once to save face with a group of peer-pressuring high schoolers, I will never do it again. Ever.

So zip number 4, with its lightning-fast descent, gave me some pause. But what was I going to do? Ask to be lowered to the ground, only to have the kids ridicule me during their trip back to Florida? That wasn’t happening. I’d have to zip.

Sandweiss hooked my trolley to the cable, and I took a deep breath. Then I pushed myself off the platform.

And, holy Jesus, were those first few seconds scary. I braced myself as my guts slid toward my throat. But, once I realized I wasn’t falling but sailing, albeit very fast, my body loosened up. I even cracked a stupid grin as I sped through the coniferous corridor like a little torpedo.

From the next platform, we took some more fast lines until we reached a gap in the course. There, one of the trees was missing a platform — still to be built — so we had to rappel down and walk a ways in the woods to the next location.

The brief jaunt gave us a chance to warm up our chilled toes. But, if Smith has his way, the course will eventually require no ground walking. That way, he reasoned, the forest will remain untrampled by human feet. The zip line allows participants to experience the woods without damaging them.

After the rappel, another zip led to a sky bridge made of wood, rope and steel cables. From its center, we could see through the Notch. It is one of the few places on the course where the trees are spaced out enough to afford a view of the surrounding mountains.

A couple more zips, followed by another rappel, and our tour was finished. For the kids from Florida, the zip -ine excursion was second only to skiing on their weeklong trip to Smuggs. Their mother, Lisa, said zip lining surpassed her on-mountain experience, hands down.

For me, the zip line offered a brief sense of weightlessness, mixed with the twin feelings of wonderment and adventure. There’s one word to describe it: Wheeeeeeeeeeee!